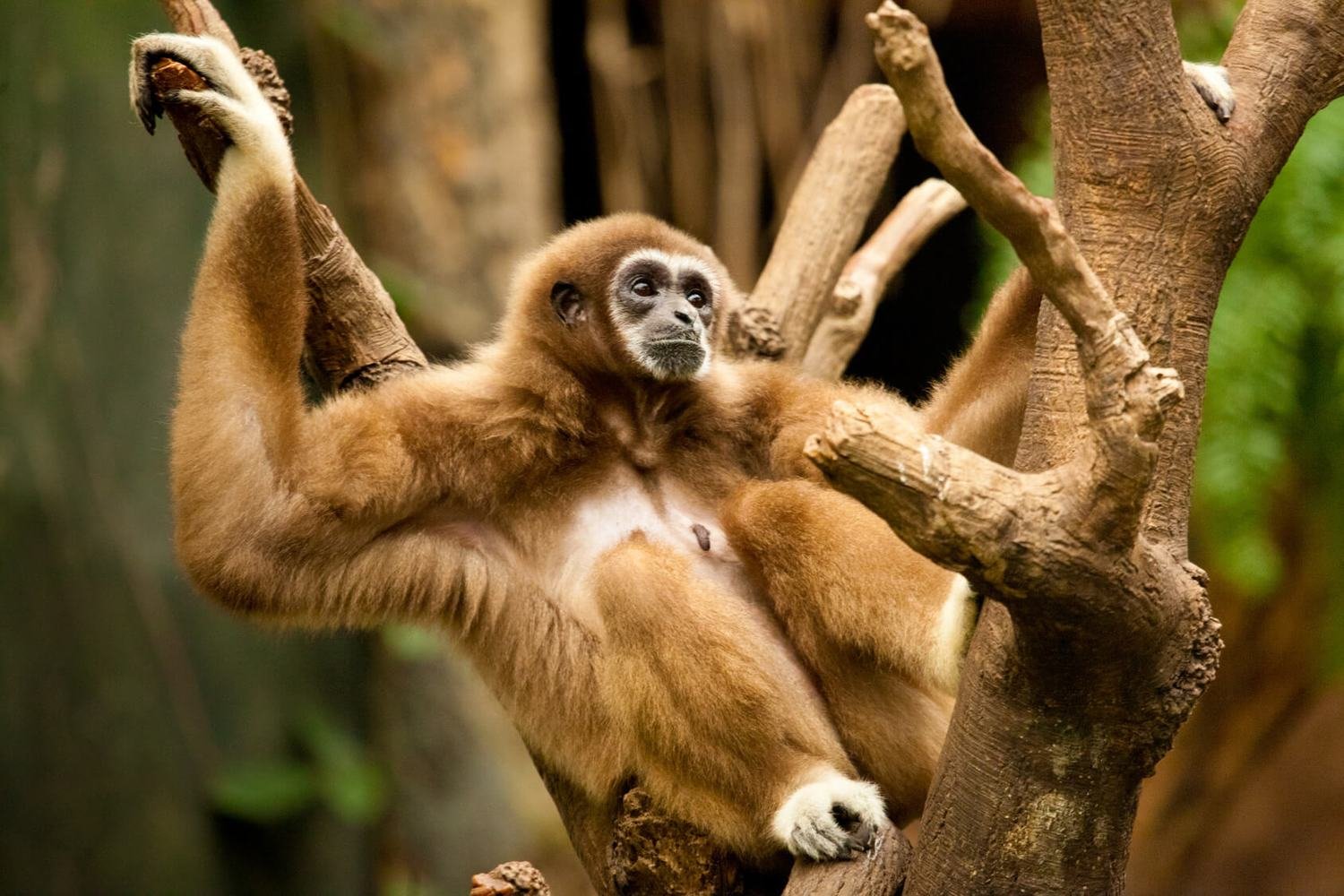 Your Adopt A Spider Monkey Kit comes in a Deluxe Folder and includes:

Adopt A Spider Monkey Kits make great gifts and can be sent directly to the recipient. Simply supply the recipient's name and mailing address as shipping information. We'll even include a letter stating the Adopt An Animal Kit is from you.

Spider monkeys have hook-like, narrow and thumbless hands; the fingers are elongate and recurved. The hair is coarse, ranging in color from a ruddy gold to brown and black; the hands and feet are usually black. Heads are small with hairless faces. An unusually long labia in females may be mistaken for a penis; it is used to attract the males. A female will urinate and that scent will stay on her labia with the scent attracting the males.

Forming loose groups of 15-25 individuals, spider monkeys are highly agile; they are said to be second only to the gibbons in this respect. During the day, spider monkey groups break up into smaller subgroups of 2-8 individuals. This social structure ('fission-fusion') is found in only one other primate, the chimpanzee. The size of subgroups and the degree to which they will avoid each other during the day is determined by food competition and the risk of predation. Also less common in primates, females rather than males disperse at puberty to join new groups. Males tend to stick together for their whole life. Hence males in a group are more likely to be related and have closer bonds than females. The strongest social bonds are formed between females and young offspring.

Spider monkeys are diurnal (active during the day) and spend the night in carefully selected sleeping trees. Groups are thought to be directed by a lead female who is responsible for planning an efficient route for the day's feeding activities. Grooming is not as important to social interaction, due perhaps to a lack of thumbs.

Spider monkeys mate year round. The female monkey chooses a male from her group with whom to mate. Both male and female spider monkeys sniff their mates to check their readiness for copulation. This process is known as “anogenital sniffing.” On average, only one offspring at a time is produced from each female. The gestation period for spider monkeys ranges from 226 to 232 days. For the first four months of life, baby spider monkeys cling to their mother's belly. Soon after, they climb to her back, eventually developing enough independence to travel on their own. Male spider monkeys have nothing to do with the raising of offspring.

At 107 grams, the spider monkey brain is twice the size of a howler monkey's of equivalent body size. This is thought to be a result of the spider monkeys' complex social system as well as their diet, which consists primarily of ripe fruit from a wide variety (over 150 species) of plants. The slow rate of development in spider monkeys may also play a role, females giving birth once every 3-4 years. Spider monkeys may live for 20 years or more.

Thousands of primates are peddled as "pets" each year, including monkeys, apes and lemurs. Highly intelligent and social animals, they suffer terribly in the inhumane pet trade.

These wild animals are bred in captivity and taken from their mothers within hours or days of birth, or stolen from their mother in the wild who is often killed in the process. Sold like toys by unethical businesses and backyard breeders, profit is put above the welfare of the animals. Unprepared guardians purchase the animals, often with little knowledge on primate care. Adorable baby monkeys quickly grow into aggressive and territorial adults. Guardians often resort to drastic measures to control the animals, such as inhumane tooth removal. Eventually they are abandoned, given to roadside zoos or sold to another unprepared family where the cycle begins again. They end up living their lives in tiny cages, isolated, lonely, deprived of their wild nature and social interaction with their own kind.

The complex physical, psychological and social needs of primates can never be met when they are kept as pets. Living in constant frustration, these wild animals can inflict serious and catastrophic injuries. They can also spread diseases that are deadly to humans, including viral, bacterial, fungal and parasitic infections. It is common for monkeys to carry tuberculosis, hepatitis and simian herpes B.

Even the smallest of monkeys are incredibly strong and become unpredictable when they reach sexual maturity. Hundreds of people have been injured by attacks from primates, sometimes causing permanent disability and disfigurement.

Every year thousands of monkeys are imprisoned in laboratories, where they are abused, neglected and killed in invasive and painful experiments. They are either bred in government or commercial facilities or laboratories, or captured from the wild. Those born in laboratories are torn from their mothers usually within three days of birth. Those from the wild are often taken from their mothers, who are sometimes killed. They are crammed into tiny crates with little to no food or water and taken to filthy holding centers, followed by long and terrifying trips in the cargo holds of passenger airlines. Following the traumatic separation from their families and/or homes, monkeys in laboratories are usually confined to small, barren cages. They barely have enough room to sit, stand, lie down or turn around.

90 percent of primates in laboratories exhibit abnormal behaviors caused by the physical abuse, psychological stress, social isolation and barren confinement that they are forced to endure. Many go insane, rocking back and forth, pacing endlessly in the cages, and engaging in repetitive motions and acts of self-mutilation.

Their fundamental needs and desires are disregarded and they are subjected to painful and traumatic procedures. Most animal experiments are not relevant to human health and do not contribute meaningfully to medical advances. Human clinical and epidemiological studies, human tissue and cell-based research methods, cadavers, sophisticated high-fidelity human patient simulators and computational models are more reliable, more precise, less expensive and more humane than animal experiments.

SPIDER MONKEYS IN THE ENTERTAINMENT INDUSTRY

The use of monkeys as “entertainers” removes animals from their natural habitat; depriving them of the ability to freely engage in instinctual behaviors. Both children and adults are desensitized to animal mistreatment by the animal entertainment industry. Whether they're at a zoo, on a film set, or under a circus tent, monkeys used as entertainment are forced to perform unnatural and painful tasks through abusive training methods.

Circus animals are forced to travel in box cars or trucks for months at a time with no regard for temperature, exercise or normal interaction with their own kind. These animals do not willingly stand on their heads, jump through rings of fire, or ride bicycles. They don’t perform these tricks because they want to and they don’t do any of these meaningless acts in their natural habitat. They do not perform because they are positively reinforced. Instead, they are trained with varying levels of punishment, neglect and deprivation.

Even under the best of circumstances, captivity is cruel for wild animals. Confined to tiny areas and gawked at by crowds, animals in exhibits and acts endure constant stress. They may suffer from temperature extremes and irregular feeding and watering. Without exercise, they become listless, their immune systems are weakened, and they become prone to sickness; many resort to self-mutilation in reaction to stress or boredom. Mental illness is rampant among confined animals. Torn from their families and deprived of all dignity, every part of their lives is controlled by their captors.