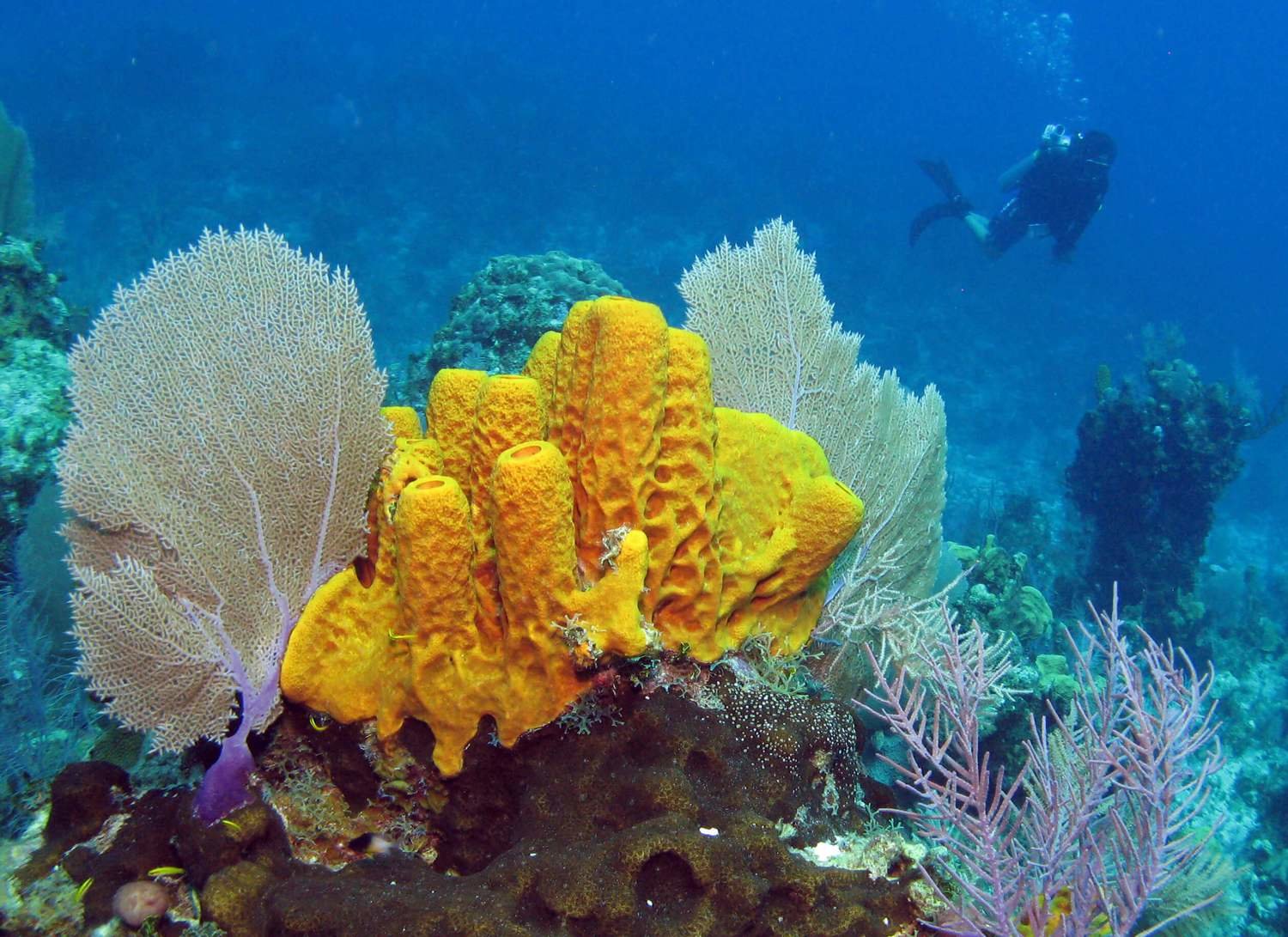 Your Adopt A Sponge Kit comes in a Deluxe Folder and includes:

Adopt A Sponge Kits make great gifts and can be sent directly to the recipient. Simply supply the recipient's name and mailing address as shipping information. We'll even include a letter stating the Adopt An Animal Kit is from you.

While sponges may look plant-like, they are multi-cellular animals that have bodies full of pores and channels allowing water to circulate through them. Sponges are bottom-dwelling sea creatures. They do not have nervous, digestive or circulatory systems. Instead, they obtain nourishment and oxygen from water constantly flowing through them. The flowing water also carries out waste products.

There are many different types of sponges in the world's oceans. Sponges come in two basic types: encrusting or free-standing. Encrusting sponges typically cover the surface of a rock in the same manner that moss covers a rock on land. Free-standing sponges have more inner volume compared with their outside surface area and sometimes grow into strange shapes, often reaching gigantic proportions.

All sponges are sessile (they are not able to move about) and aquatic animals. Although there are freshwater species, the great majority are marine (salt water) species, ranging from tidal zones to depths exceeding 5.5 miles. Most sponges live their lives attached to a reef.

Sponges are similar to other animals in some ways, but unlike most animals they lack true tissues and organs and have no body symmetry. The scientific term for sponges is Porifera which literally means "pore-bearing." They are covered with tiny pores which lead to a system of canals and out to one or more larger holes. Within the canals of the sponge, chambers are lined with specialized cells that have a sticky, funnel shaped collar and a hairlike whip. The collar cells force water through the sponge. The water brings in nutrients and oxygen, while it carries out waste and carbon dioxide. The sticky collars of the collar cells also pick up tiny bits of food brought in with the water. Another type of cell takes the food to other cells within the sponge.

Sponges are very effective filter feeders, since they are able to capture and eat particles as small as bacteria as well as much larger particles. The "skeleton" of the sponge is composed of tiny needle-like splinters called spicules, a mesh of protein called spongin, or a combination of both.

Most sponges are hermaphroditic (both male and female), but play either the male or female role during reproduction. Sperm is released into the water by "male" sponges and travels to "female" sponges, where fertilization occurs internally. Baby sponges are released from the female sponge and float around in the water column as plankton for a few days. They then settle down and start growing. The next time the sponges reproduce, they may change sexual roles.

Sponges are also known for regenerating from fragments that are broken off, although this only works if the fragments include the right types of cells. A few species reproduce by budding. Budding is a form of asexual reproduction in which a new organism develops from an outgrowth, or bud, due to cell division at one particular site. Since the reproduction is asexual, the newly created organism is a clone and is genetically identical to the parent organism. Some species of sponge produce "survival pods" that remain dormant until conditions are right, and then either form completely new sponges or recolonize the skeletons of their parents.

While most of the approximately 5,000–10,000 known species feed on bacteria and other food particles in the water, some host micro-organisms as endosymbionts (organisms that live within the body or cells of another organism). These alliances often produce more food and oxygen than they consume. A few species of sponge that live in food-poor environments have become carnivores that prey mainly on small crustaceans.

Sponges are susceptible to damage by fishing, especially bottom trawling and dredging. In typical trawling, a large net is dragged across the ocean floor, its mouth held open by two 2-ton doors called otterboards. The siliceous skeleton of the sponges is fragile, and these organisms are easily broken by physical impact. Sponges in the vicinity of trawl tracks are shattered or completely removed.

While less harmful, hook and line fishing, as well as crustacean trapping, may also damage sponges. When the fishing gear is hauled to the surface, the lines and traps drag along the ocean floor and have the potential to break corals and sponges. Breakage of reef sponges may have dire consequences for the recruitment of new sponges, as sponge larvae require the siliceous skeletons of past generations as a substrate. Without a hard substrate, new sponges cannot settle and regrow broken parts of the reef. It has been estimated that broken sponge reefs may take up to 200 years to recover.

In addition, offshore oil and gas exploration threatens sponge reefs. Even if exploratory drilling is not done on or immediately adjacent to the reefs, it may still have a negative impact by increasing the amount of sediment in the seawater, or through hydrocarbon pollution.