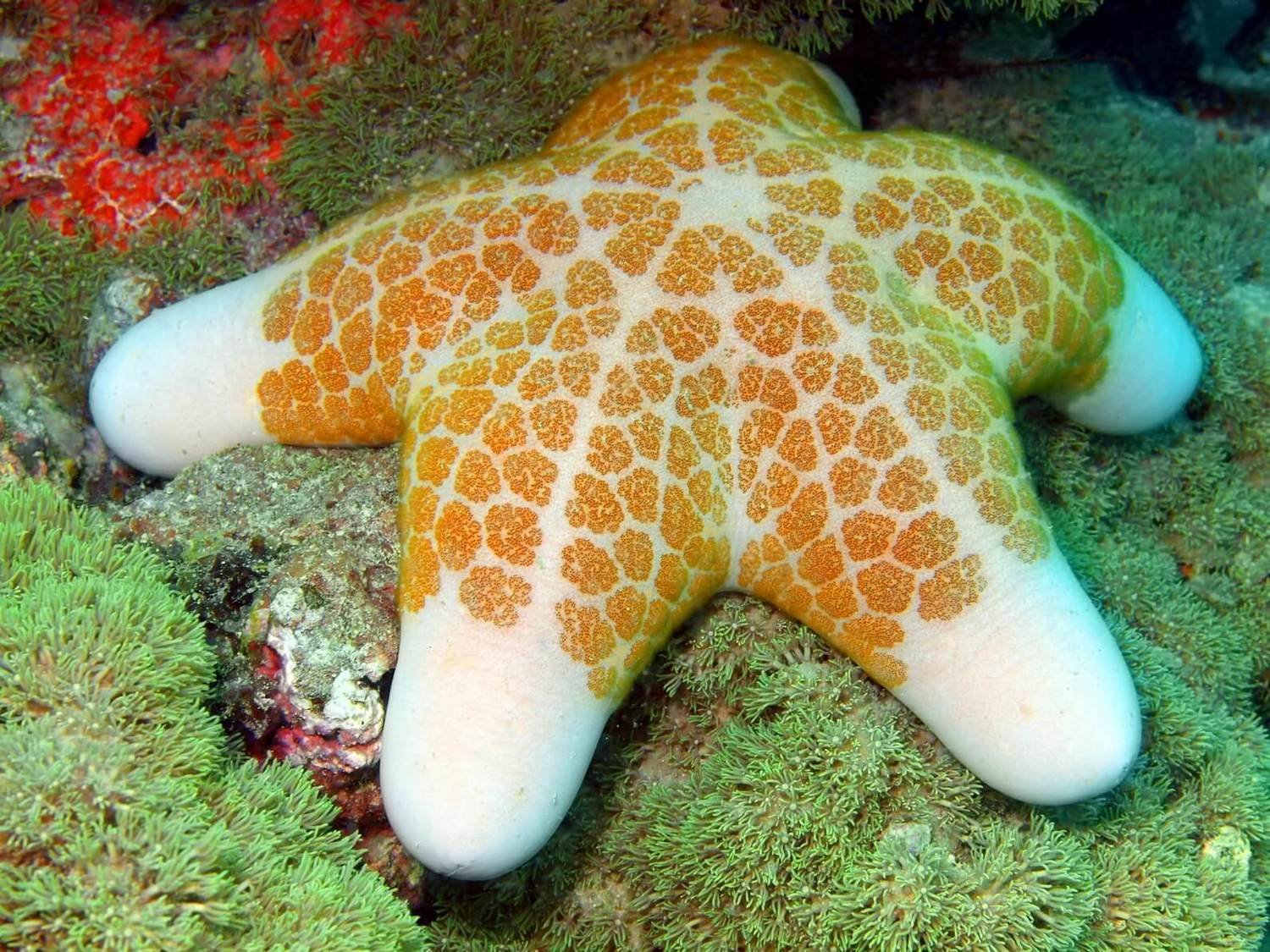 Your Adopt A Starfish Kit comes in a Deluxe Folder and includes:

Adopt A Starfish Kits make great gifts and can be sent directly to the recipient. Simply supply the recipient's name and mailing address as shipping information. We'll even include a letter stating the Adopt An Animal Kit is from you.

Starfish, or sea stars, are star-shaped echinoderms belonging to the class Asteroidea. About 1,500 species of starfish occur on the seabed in all the world's oceans, from the tropics to frigid polar waters.

Starfish are marine invertebrates. They typically have a central disc and five arms, though some species have more. The aboral, or upper, surface may be smooth, granular or spiny, and is covered with overlapping plates. Many species are brightly colored in various shades of red or orange, while others are blue, grey or brown.

Starfish have tube feet operated by a hydraulic system and a mouth at the center of the oral, or lower, surface. They are opportunistic feeders, and are mostly predators on bottom-dwelling invertebrates. Several species have specialized feeding behaviors.

Starfish have complex life cycles and can reproduce both sexually and asexually. Most can regenerate damaged parts or lost arms and they can shed arms as a means of defense. Some starfish can even regenerate their whole body from a single arm, or even from fragments of an arm. Regrowth can take several months or years. A separated limb lives off stored nutrients until it regrows a disc and mouth and is able to feed again.

Echinoderms, including starfish, maintain a delicate internal electrolyte balance that is in equilibrium with sea water. This means that it is only possible for them to live in a marine environment and they are not found in any freshwater habitats. Starfish species inhabit all of the world's oceans. Habitats include tropical coral reefs, rocky shores, tidal pools, mud, sand, kelp forests, seagrass meadows and the deep-sea floor. The lifespan of a starfish varies considerably between species, generally being longer in larger forms.

Most species of starfish are gonochorous, there being separate male and female individuals. Some species are simultaneous hermaphrodites, producing eggs and sperm at the same time. Other starfish are sequential hermaphrodites. Individuals of species like Asterina gibbosa start life as males before changing sex into females as they grow older. In some species such as Nepanthia belcheri, a large female can split in half and the resulting offspring are males. When these grow large enough they change back into females.

Starfish fertilization is generally external. In most species, the buoyant eggs and sperm are simply released into the water (free spawning) and the resulting embryos and larvae live as part of the plankton. In others, the eggs may be stuck to the undersides of rocks. Some starfish brood their eggs in pouches or by "sitting" on them. Brooding is especially common in polar and deep-sea species that live in environments unfavorable for larval development, and in smaller species that produce just a few eggs.

In the tropics, a plentiful supply of phytoplankton is continuously available for starfish larvae to feed on. Spawning takes place at any time of year, each species having its own characteristic breeding season. In temperate regions, the spring and summer brings an increase in food supplies. The first individual of a species to spawn may release a pheromone that serves to attract other starfish. In some species, a male and female may come together and form a pair. Starfish may use environmental signals to coordinate the time of spawning (day length to indicate the correct time of the year, dawn or dusk to indicate the correct time of day), and chemical signals to indicate their readiness to breed.

The feeding activity of the omnivorous starfish Oreaster reticulatus on sandy and seagrass bottoms in the Virgin Islands appears to regulate the diversity, distribution and abundance of microorganisms. These starfish engulf piles of sediment removing the surface films and algae adhering to the particles. Organisms that dislike this disturbance are replaced by others better able to rapidly recolonize "clean" sediment. In addition, foraging by these migratory starfish creates diverse patches of organic matter, which may play a role in the distribution and abundance of organisms such as fish, crabs and sea urchins that feed on the sediment.

Several species of starfish sometimes suffer from a wasting condition caused by bacteria. Starfish are vulnerable to high temperatures. Starfish and other echinoderms are sensitive to marine pollution. The common starfish is considered to be a bioindicator for marine ecosystems.

Starfish are inhumanely taken from their habitat and sold to tourists as souvenirs, ornaments, curios or for display in aquariums. In particular, Oreaster reticulatus, with its easily accessed habitat and conspicuous coloration, is widely collected in the Caribbean. In the early to mid 20th century, this species was common along the coasts of the West Indies, but collection and trade have severely reduced its numbers. In the State of Florida, O. reticulatus is listed as endangered and its collection is illegal. Nevertheless, it is still sold throughout its range and beyond. A similar situation exists in the Indo-Pacific for species such as Protoreaster nodosus.