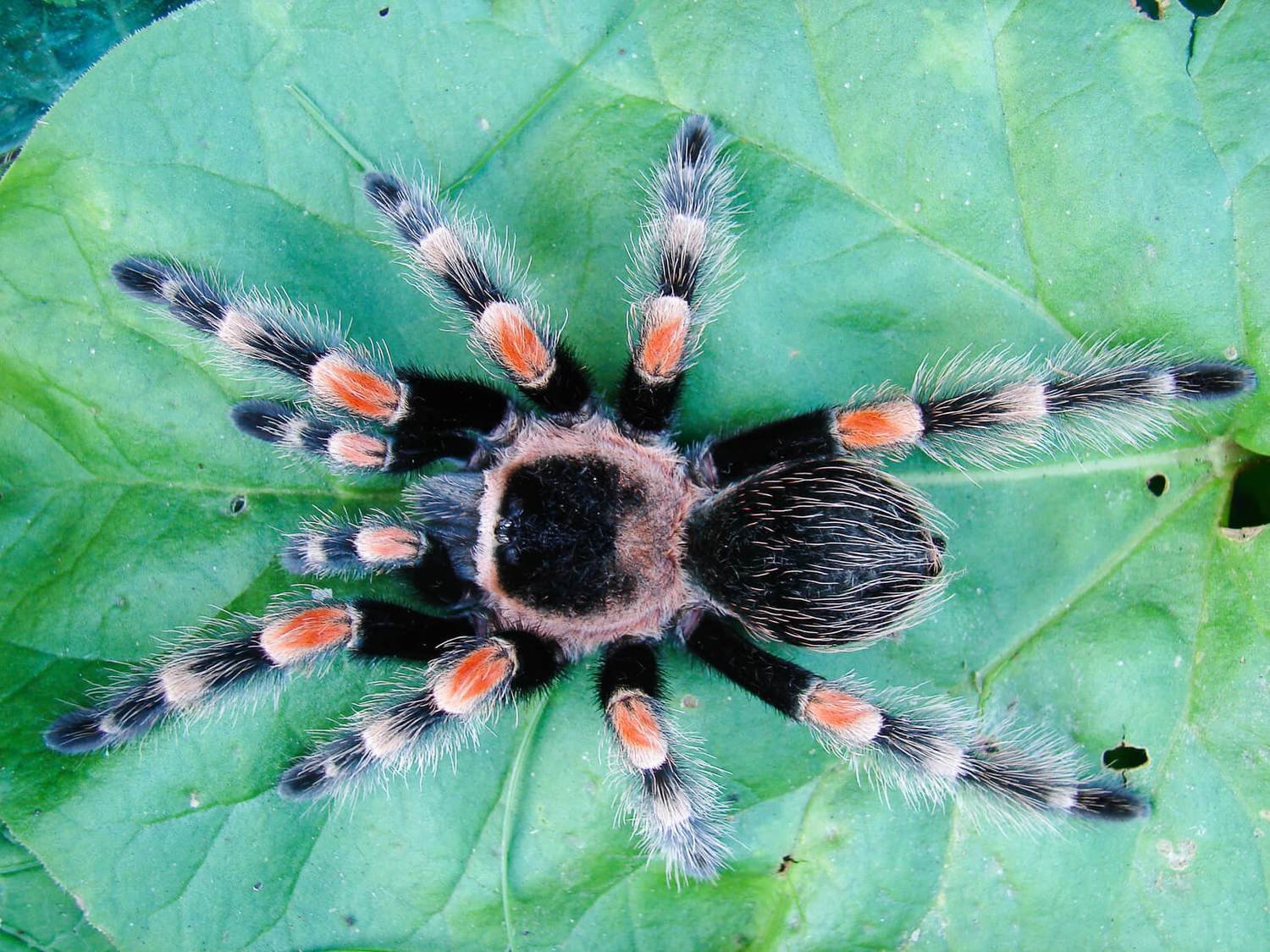 Your Adopt A Tarantula Kit comes in a Deluxe Folder and includes:

Adopt A Tarantula Kits make great gifts and can be sent directly to the recipient. Simply supply the recipient's name and mailing address as shipping information. We'll even include a letter stating the Adopt An Animal Kit is from you.

Like all arthropods, the tarantula is an invertebrate that relies on an exoskeleton for muscular support. Like other Arachnida a tarantula’s body comprises two main parts, the prosoma (or cephalothorax) and the opisthosoma (or abdomen).

Spiders are invertebrates but are not considered insects because they only have two main body parts instead of three, eight legs instead of six and no antennae. Most spiders also have eight simple eyes, while insects have large, compound eyes. Some have no eyes and others have as many as 12. Spiders, along with ticks, mites, harvestmen and scorpions, are called arachnida.

Tarantulas of various species occur in the southern and western parts of the United States, in Central America, and throughout South America. Other species occur variously throughout Africa, much of Asia and all of Australia. In Europe, some species occur in Spain, Portugal, Turkey, Italy, and Cyprus. Their natural habitats include savanna, grasslands such as the pampas, rainforests, deserts, scrubland, mountains, and cloud forests.

Tarantulas sizes range from as small as a fingernail to as large as a dinner plate when the legs are fully extended. Most species of North American tarantulas are brown. Elsewhere species are cobalt blue, black with white stripes and greenbottle blue. Some have yellow leg markings or metallic blue legs with vibrant orange abdomens.

The tarantula's mouth is a short straw-shaped opening that can only suck, meaning that anything taken into it must be in liquid form. Prey with large amounts of solid parts, such as mice, must be crushed and ground up or predigested, which is accomplished by coating the prey with digestive juices.

A tarantula perceives its surroundings primarily via sensory organs called setae (hairs or spines). Although a tarantula has eyes, touch is its keenest sense, and in hunting it primarily depends on vibrations given off by the movements of its prey. A tarantula's setae are very sensitive organs and are used to sense chemical signatures, vibrations, wind direction, and possibly even sound. Tarantulas are also very responsive to the presence of certain chemicals such as pheromones. Most tarantulas are not able to see much more than light, darkness, and motion. Arboreal tarantulas generally have better vision compared with terrestrial tarantulas.

Tarantulas have also evolved specialized hairs to defend themselves against predators. Besides the normal "hairs" covering the body, some tarantulas also have a dense covering of irritating hairs called urticating hairs, that they may use as protection against enemies. These hairs are present on New World species but not on tarantulas from the Old World. Urticating hairs are usually kicked off the abdomen by the tarantula, or rubbed against the target. These fine hairs are barbed and serve to irritate. They can be lethal to small animals such as rodents. Tarantulas also use these hairs for other purposes such as to mark territory, to line their shelters, and to discourage flies from feeding on the spiderlings. Urticating hairs do not grow back, but are replaced with each moult.

All tarantulas are venomous. Before biting, tarantulas may signal their intention to attack by rearing up into a "threat posture". They may then slap down on the intruder with their raised front legs. If that response fails to deter the attacker, the tarantulas of the Americas flick urticating bristles toward the pursuing predator, and then retreat. If there is no line of retreat, their final response may also be to whirl suddenly and bite. Some tarantulas are well known to give dry bites; not pumping venom into the wound. Old-world tarantulas (from Europe, Africa, Asia and Australia) have no urticating bristles and are more likely to attack when disturbed. Old-world tarantulas often have more potent venom.

Once a male spider reaches maturity and becomes motivated to mate, it will weave a web mat on a flat surface. The spider will then rub its abdomen on the surface of this mat and in so doing release a quantity of semen. It may then insert its pedipalps (short leg-like appendages) into the pool of semen. The pedipalps absorb the semen and keep it viable until a mate can be found. When a male spider detects the presence of a female, the two exchange signals to establish that they are of the same species. These signals may also lull the female into a receptive state. If the female is receptive then the male approaches her and inserts his pedipalps into an opening in the lower surface of her abdomen. After the semen has been transferred, the male will swiftly leave the scene.

Females deposit 50 to 2,000 eggs, depending on the species, in a silken egg sac and guard it for 6 to 8 weeks. During this time, the female will stay very close to the egg sac and become more aggressive. Within most species, the female turns the egg sac often, which is called brooding. This keeps the eggs from deforming due to sitting too long. The young spiderlings remain in the nest for some time after hatching where they live off the remains of their yolk sac before dispersing.

Like other spiders, tarantulas have to shed their exoskeleton periodically in order to grow, a process called molting. A young tarantula may do this several times a year, while full grown tarantulas will only molt once a year or less, or sooner in order to replace lost limbs or lost urticating hairs.

Tarantulas may live for many years. Most species take two to five years to reach adulthood, but some species may take up to ten years to reach full maturity. Upon reaching adulthood, males typically have less than 2 years left to live and will immediately go in search of a female with which to mate. Male tarantulas rarely molt again once they reach adulthood. Females will continue to molt after reaching maturity. Females have been known to reach 30 to 40 years of age, and have survived on water alone for up to 2 years.

Some tarantulas hunt prey primarily in trees; others hunt on or near the ground. All tarantulas can produce silk – while arboreal species will typically reside in a silken "tube tent", terrestrial species will line their burrows with silk to stabilize the burrow wall and facilitate climbing up and down. Tarantulas mainly eat insects and other arthropods, using ambush as their primary method of prey capture. The biggest tarantulas can kill animals as large as lizards, mice, birds and small snakes.

Regardless of their fearsome reputation, tarantulas are themselves an object of predation. The most specialized of these predators are large members of the wasp family Pompilidae. In the Americas, these insects are termed "tarantula hawks". The largest tarantula hawks will track, attack and kill large tarantulas. Humans can also be considered predators of tarantulas, as tarantulas are considered a delicacy in certain cultures. Some other arthropods, such as giant centipedes, are also known to prey on tarantulas.

Like most animals, the primary threat to tarantulas is the destruction of their habitat. Human development has taken an alarming toll on the environment. Impact from land use practices such as agricultural conversion, deforestation, and urban sprawl continue to degrade and fragment remaining pockets of habitat and accelerate biodiversity loss. Pesticides and other forms of pollution are also of serious concern, as well as genetically modified organisms (GMOs).

Tarantulas are also threatened by the pet trade. Regulations are in place to prevent importation of tarantulas into the U.S., but there are few measures to prohibit the overcollection of tarantulas. Captivity is cruel for wild animals. Animals are captured from their native habitat and transported to various countries to be sold as “pets”. Backyard breeders also supply exotic animals. The sellers of these animals often disregard the dangers, difficulties, physical and physiological needs of the animals they peddle. The suffering of the animals in the hands of unqualified and hapless buyers appears to be of no concern in the lucrative exotic pet trade.