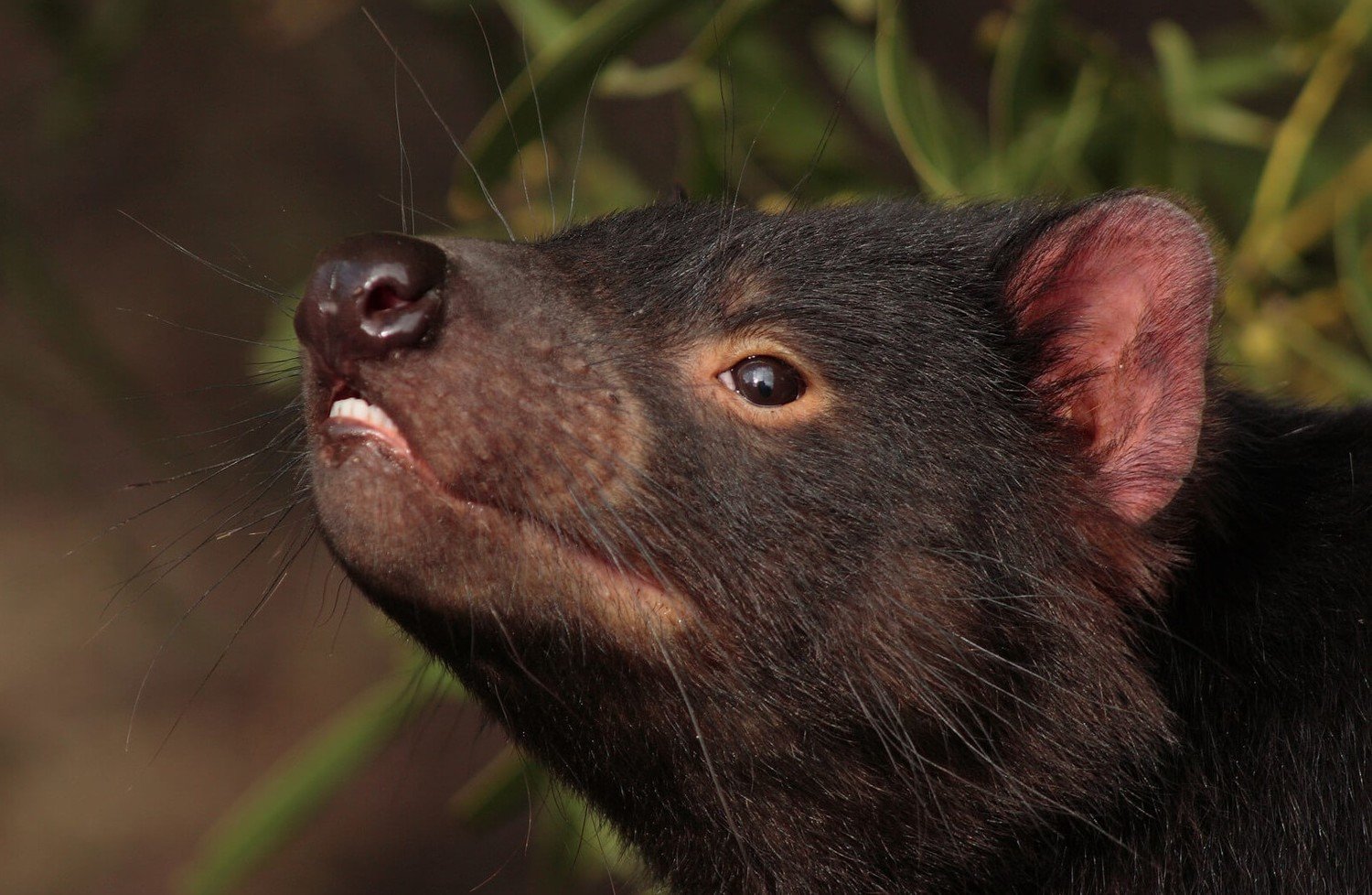 Your Adopt A Tasmanian Devil Kit comes in a Deluxe Folder and includes:

Adopt A Tasmanian Devil Kits make great gifts and can be sent directly to the recipient. Simply supply the recipient's name and mailing address as shipping information. We'll even include a letter stating the Adopt An Animal Kit is from you.

The Tasmanian devil (Sarcophilus harrisii) is a carnivorous marsupial of the family Dasyuridae, now found in the wild only on the Australian island state of Tasmania. The size of a small dog, they became the largest carnivorous marsupials in the world following the extinction of the thylacine in 1936. They are characterized by their stocky and muscular build, black fur, pungent odor, extremely loud and disturbing screech, keen sense of smell, and ferocity when feeding.

The Tasmanian devil's large head and neck allow it to generate one of the strongest bites of any land mammal predator, and it hunts prey and scavenges carrion as well as eating household products if humans are living nearby. Although they usually are solitary, they sometimes eat with other devils and defecates in a communal location. Unlike most other dasyurids, the devil thermoregulates effectively and is active during the middle of the day without overheating. Despite its rotund appearance, the devil is capable of surprising speed and endurance, and can climb trees and swim across rivers.

Devils are not monogamous, and their reproductive process is very robust and competitive. Males fight one another for the females, and then guard their partners to prevent female infidelity. Females can ovulate three times in as many weeks during the mating season, and 80% of two-year-old females are seen to be pregnant during the annual mating season. Females average four breeding seasons in their life and give birth to 20 to 30 live young after a three week gestation. The newborn are pink, lack fur, have indistinct facial features and weigh around 0.0071 oz at birth. As there are only four nipples in the pouch, competition is fierce and few newborns survive. The young grow rapidly and are ejected from the pouch after around 100 days, weighing roughly 7.1 oz.

After being ejected, the devils stay outside the pouch, but they remain in the den for around another three months, first venturing outside the den between October and December before becoming independent in January. During this transitional phase out of the pouch, the young devils are relatively safe from predation as they are generally accompanied. When the mother is hunting they can stay inside a shelter or come along, often riding on their mother's back. During this time they continue to drink their mother's milk.

The young become independent after around nine months, so the female spends most of her year in activities related to childbirth and rearing. Devils are fully grown at two years of age, and few devils live longer than five years in the wild.

The devil stores body fat in its tail, and healthy devils have fat tails. The tail is important to its physiology, social behavior and locomotion. It acts as a counterbalance to aid stability when the devil is moving quickly. A scent gland at the base of its tail is used to mark the ground behind the animal with its strong, pungent scent. The devil has long claws that allow it to dig burrows, seek subterranean food easily and grip prey or mates strongly.

Devils have long whiskers on their face and in clumps on the top of the head. These help the devil locate prey when foraging in the dark, and aid in detecting when other devils are close during feeding. The whiskers can extend from the tip of the chin to the rear of the jaw and can cover the span of its shoulder. Hearing is their dominant sense, and they also have an excellent sense of smell.

Devils prefer open forest to tall forest, and dry rather than wet forests. Young devils can climb trees, but this becomes more difficult as they grow larger. Tasmanian devils do not form packs, but rather spend most of their time alone once weaned. They are considered to be non-territorial in general, but females are territorial around their dens. Tasmanian devils occupy a home range.

Devils use three or four dens regularly. Dens formerly owned by wombats are especially prized as maternity dens because of their security. Dense vegetation near creeks, thick grass tussocks and caves are also used as dens. Adult devils use the same dens for life. It is believed that, as a secure den is highly prized, some may have been used for several centuries by generations of animals.

On average, devils eat about 15% of their body weight each day, although they can eat up to 40% of their body weight in 30 minutes if the opportunity arises. Eating is a social event for the Tasmanian devil. This combination of a solitary animal that eats communally makes the devil unique among carnivores. Much of the noise attributed to the animal is a result of raucous communal eating, at which up to 12 individuals can gather, although groups of two to five are common. This has been interpreted as notifications to colleagues to share in the meal, so that food is not wasted by rot and energy is saved. The amount of noise is correlated to the size of the carcass.

Devils eat in accordance with a system. Juveniles are active at dusk, so they tend to reach the source before the adults. Typically, the dominant animal eats until it is satiated and leaves, fighting off any challengers in the meantime. Defeated animals run into the bush with their hair and tail erect, their conqueror in pursuit and biting their victim's rear where possible. Disputes are less common as the food source increases as the motive appears to be getting sufficient food rather than oppressing other devils.

Feeding devils exhibit twenty known physical postures, including their characteristic vicious yawn, and eleven different vocal sounds. They usually establish dominance by sound and physical posturing. The white patches on the devil are visible to the night-vision of its colleagues. Chemical gestures are also used. They can also stand on their hind legs and push each others shoulders with their front legs and heads, similar to sumo wrestling.

Since the late 1990s, devil facial tumor disease has drastically reduced the devil population and now threatens the survival of the species, which in 2008 was declared to be endangered. Programs are currently being undertaken by the Government of Tasmania to reduce the impact of the disease, including an initiative to build up a group of healthy devils in captivity, isolated from the disease. While the thylacine was extant it preyed on the devil, which targeted young and unattended thylacine cubs in their dens.

Localized populations of devils have also been severely reduced by collisions with motor vehicles, particularly when they are eating roadkill.

Due to export restrictions and the failure of overseas devils to breed, there are almost no devils outside Australia except for any that have been illegally smuggled.