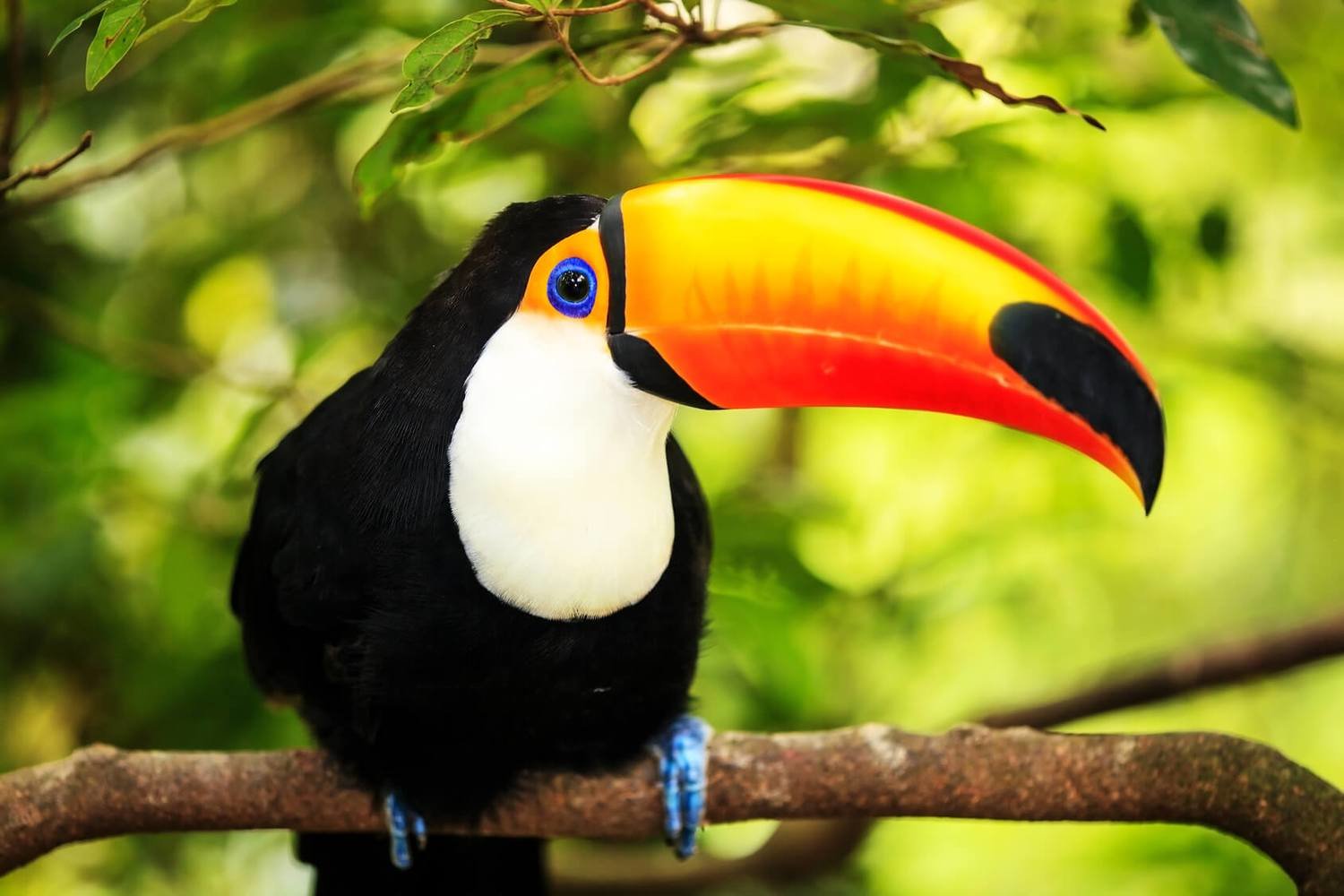 Your Adopt A Toucan Kit comes in a Deluxe Folder and includes:

Adopt A Toucan Kits make great gifts and can be sent directly to the recipient. Simply supply the recipient's name and mailing address as shipping information. We'll even include a letter stating the Adopt An Animal Kit is from you.

The iconic toucan is known the world over for its large, colorful bill. Found only in the tropical forests of Central America, South America, and the Caribbean, there are more than 40 species of toucans alive today. The most common and recognizable species of toucan bears the scientific name, Ramphastos toco. All species of toucans are of the Order Piciformes, to which woodpeckers also belong.

Toucans acquired their name from the sound that they make. Their song often resembles frogs croaking. Other species of toucan have a variety of chirps, barks, growls, croaks, and even donkey-like braying as part of their songs. Toucans combine their vocal range with different taps and clicks from their bills. The females of the species tend to have higher vocal ranges than males.

In comparison to North American birds, toucans grow to be quite large. They average just over two feet in height and 20 ounces in weight. The smallest toucan species, the tawny-tufted toucanet, is only about 12.5 inches in height at maturity. Toucans are most recognized for their oversized bill. A full grown toucan, male or female, has a colorful bill seven and a half inches in length, nearly half the size of the bird.

The toucan’s bill serves many functions. Because of its colorful appearance, it was first believed that male toucans used their bills during breeding competition. However, since females possess the same dramatic trait, it is not likely that males are chosen for mating based on their bills. Toucans do use their bills in a particularly fascinating mating ritual in which they toss fruit back and forth to one another.

Although the large, colorful bill may be daunting in size and appearance to rivals, it does not provide much in the way of weaponry. The structure of the bill actually resembles a honeycomb of bone-like material called Keratin. Keratin is what makes up the hair and nails of humans. Much of the structure is made up of air, making it a useless defense mechanism against potential prey. The inside edges of the bill are serrated to aid in catching, grasping and tearing food.

The bill of the toucan may be an ineffectual weapon, but it certainly serves many other important functions. They use it for picking fruit from branches too small to support their considerable weight, and as a tool for stripping away the outer rind of their findings. Toucans are omnivorous and eat a combination of fruit, vegetation, nuts, seeds and insects. They may even eat small lizards, frogs, birds or the eggs of other birds from time to time if available. Toucans have a long, narrow, feather-like tongue with bristles along the sides. This helps them catch and taste their food before moving it down their throats.

The brightly colored aspect of the birds may be seen as a potential weakness for defense against predators, but because toucans reside in the colorful tropical forests of South America, their coloring actually affords them adequate camouflage. Toucans are mainly black and white, but have variations of yellow, orange and green depending on the species. Toucans are known as particularly vocal birds suggesting that they are not too concerned about predators finding them.

Toucans have a relatively small wingspan, about the length of their own bodies. They are capable of flight, but only for small distances. This is not an obstacle or a risk to the toucan’s safety, as they spend nearly all their lives high in the forest canopy. They seldom make trips to the forest floor.

Toucans navigate the canopy by hopping from branch to branch, gripping with their long, curved toes and sharp claws. Toucans are actually Zygodactyls, meaning they have two toes pointing forwards, and two toes pointing backwards. This foot design aids the toucan in maneuvering up and down tree trunks and in and out of tree cavities.

Toucans reside in flocks of about six birds, although they often forage for food alone. They nest in hollowed out tree cavities, which may seem like a strange choice for birds with such large bills. However, the toucan has an interesting method of getting comfortable in its narrow, enclosed nest. Toucans sleep with their heads against their backs, tucked under one wing. The bird then flips its tail up over its head and settles in for the night.

The toucan is known as a social, playful bird. They travel in search of food in loose groups of up to 22 birds. Preferring fruit over all other food sources, toucans usually begin their day by visiting the fruit trees in their home territory. From there, they may make longer treks in search of new fruit trees. As toucans are digesting they enjoy playful sparring with one another before returning home to roost for the night.

Toucans have approximately two to four eggs each year that both parents care for. Eggs are incubated for about 15 – 18 days before hatching. Young toucans are not born with the signature large bill. It develops as they grow, reaching full size after several months. The birds are considered mature at three to four years of age. The lifespan of the toucan is not known in the wild, but birds in captivity can live to be up to 18 years old.

Large birds of prey and wildcats native to the tropical forests of the toucan’s habitat also prey upon them. Smaller mammals are likely deterred by the deceptively menacing appearance of the toucan’s bill. Snakes, rats and weasels seek out toucan eggs, but are not known as predatory threats to the birds.

The major threat to the toucan is humans. Aside from hunting the birds, humans also capture the toucan and sell them as pets. Captivity is cruel for wild animals. Animals are captured from their native habitat and transported to various countries to be sold as “pets”. Backyard breeders also supply exotic animals. The sellers of these animals often disregard the dangers, difficulties, physical and physiological needs of the animals they peddle. The suffering of the animals in the hands of unqualified and hapless buyers appears to be of no concern in the lucrative exotic pet trade.