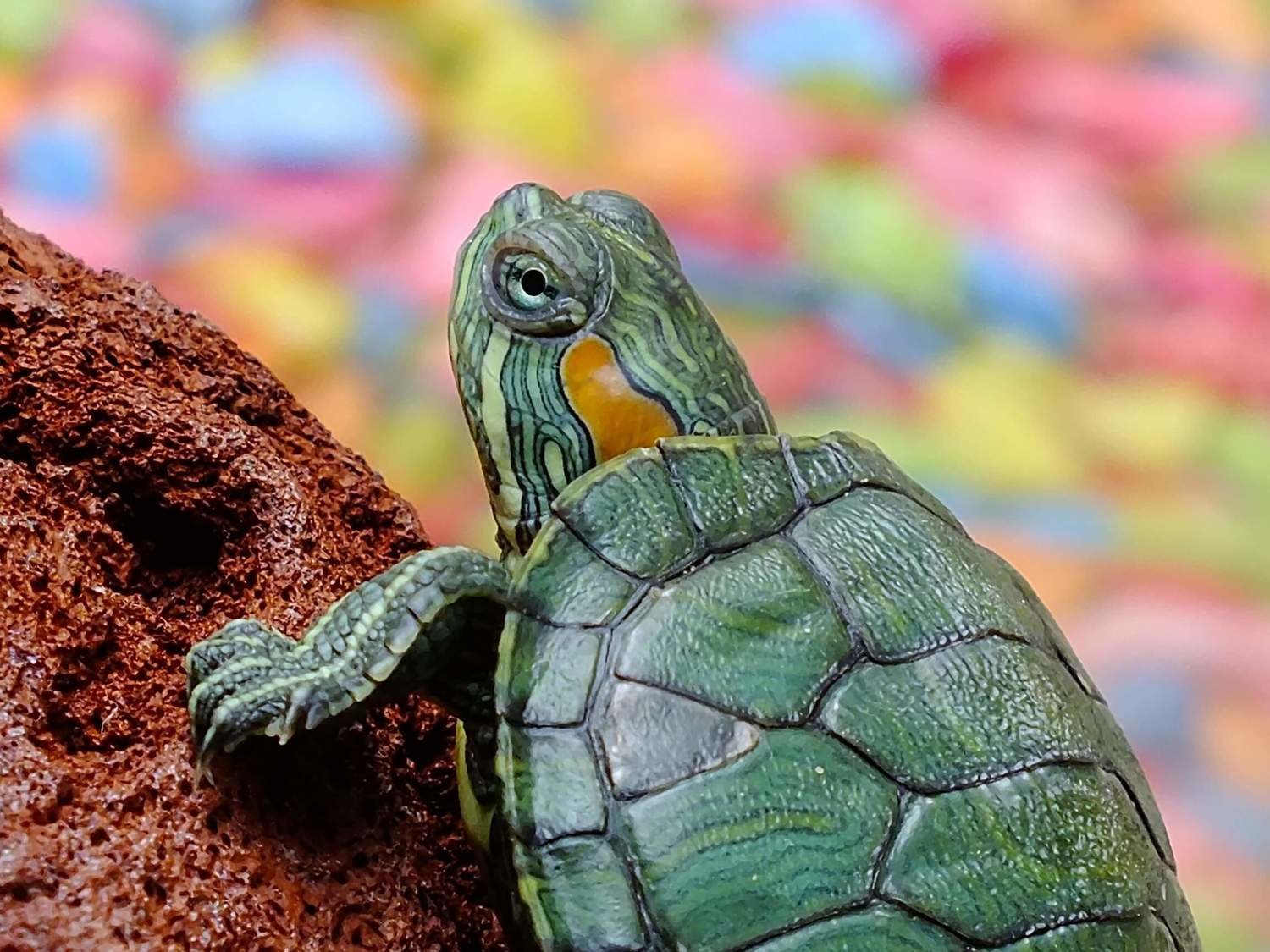 Your Adopt A Turtle Kit comes in a Deluxe Folder and includes:

Adopt A Turtle Kits make great gifts and can be sent directly to the recipient. Simply supply the recipient's name and mailing address as shipping information. We'll even include a letter stating the Adopt An Animal Kit is from you.

Turtles are reptiles of the order Testudines characterized by a special bony or cartilaginous shell developed from their ribs that acts as a shield. "Turtle" may refer to terrapins, tortoises or sea turtles. The earliest known turtles date from 215 million years ago, making turtles one of the oldest reptile groups and a more ancient group than lizards, snakes and crocodiles. Of the many species alive today, several are highly endangered.

Like other reptiles, turtles are ectotherms - their internal temperature varies according to the ambient environment, commonly called cold-blooded. Like other amniotes (reptiles, dinosaurs, birds, and mammals), they breathe air and do not lay eggs underwater, although many species live in or around water. The largest turtles are aquatic, reaching a shell length of 6.6 feet. The smallest turtle is the speckled padloper tortoise of South Africa. It measures no more than 3.1 inches.

Turtles are divided into two groups, according to how they evolved a solution to the problem of withdrawing their necks into their shells: the Cryptodira, which can draw their necks in while contracting it under their spine; and the Pleurodira, which contract their necks to the side.

Most turtles that spend most of their lives on land have their eyes looking down at objects in front of them. Some aquatic turtles, such as snapping turtles and soft-shelled turtles, have eyes closer to the top of the head. These species of turtles can hide from predators in shallow water, where they lie entirely submerged except for their eyes and nostrils. Sea turtles possess glands near their eyes that produce salty tears that rid their body of excess salt taken in from the water they drink. Turtles are thought to have exceptional night vision and have color vision.

Some land turtles have very poor pursuit movement abilities, which are normally reserved for predators that hunt quick moving prey, but carnivorous turtles are able to move their heads quickly to snap. Turtles have a rigid beak. They use their jaws to cut and chew food. Instead of teeth, the upper and lower jaws of the turtle are covered by horny ridges. Carnivorous turtles usually have knife-sharp ridges for slicing through their prey. Herbivorous turtles have serrated-edged ridges that help them cut through tough plants. Turtles use their tongues to swallow food, but they cannot, unlike most reptiles, stick out their tongues to catch food.

The upper shell of the turtle is called the carapace. The lower shell that encases the belly is called the plastron. The carapace and plastron are joined together on the turtle's sides by bony structures called bridges. The inner layer of a turtle's shell is made up of about 60 bones that include portions of the backbone and the ribs, meaning the turtle cannot crawl out of its shell. The shape of the shell gives helpful clues to how a turtle lives. Most tortoises have a large, dome-shaped shell that makes it difficult for predators to crush the shell between their jaws. Most aquatic turtles have flat, streamlined shells which aid in swimming and diving. American snapping turtles and musk turtles have small, cross-shaped plastrons that give them more efficient leg movement for walking along the bottom of ponds and streams.

The color of a turtle's shell may vary. Shells are commonly colored brown, black or olive green. In some species, shells may have red, orange, yellow or grey markings and these markings are often spots, lines or irregular blotches. One of the most colorful turtles is the eastern painted turtle which includes a yellow plastron and a black or olive shell with red markings around the rim. Tortoises, being land-based, have rather heavy shells. In contrast, aquatic and soft-shelled turtles have lighter shells that help them avoid sinking in water and swim faster with more agility.

Turtles do not molt their skins all at once, as snakes do, but continuously, in small pieces. Tortoises also shed skin, but a lot of dead skin is allowed to accumulate into thick knobs and plates that provide protection to parts of the body outside the shell. By counting the rings it is possible to estimate the age of a turtle.

Terrestrial tortoises have short, sturdy feet. Tortoises are famous for moving slowly, in part because of their heavy, cumbersome shell, which restricts stride length. The amphibious turtles normally have limbs similar to those of tortoises, except the feet are webbed and often have long claws. These turtles swim using all four feet in a way similar to the dog paddle, with the feet on the left and right side of the body alternately providing thrust. Large turtles tend to swim less than smaller ones, and the very big species, such as alligator snapping turtles, hardly swim at all, preferring to simply walk along the bottom of the river or lake.

As well as webbed feet, turtles have very long claws, used to help them clamber onto riverbanks and floating logs, upon which they like to bask. Male turtles tend to have particularly long claws, and these appear to be used to stimulate the female while mating. Sea turtles are almost entirely aquatic and have flippers instead of feet. Sea turtles fly through the water, using the up-and-down motion of the front flippers to generate thrust; the back feet are not used for propulsion, but may be used as rudders for steering. Compared with freshwater turtles, sea turtles have very limited mobility on land, and apart from the dash from the nest to the sea as hatchlings, male sea turtles normally never leave the sea. Females must come back onto land to lay eggs. They move very slowly and laboriously, dragging themselves forwards with their flippers.

Although many turtles spend large amounts of their lives underwater, all turtles and tortoises breathe air, and must surface at regular intervals to refill their lungs. They can also spend much of their lives on dry land.

Turtles lay eggs, like other reptiles, which are slightly soft and leathery. The eggs of the largest species are spherical, while the eggs of the rest are elongated. In some species, temperature determines whether an egg develops into a male or a female: a higher temperature causes a female, a lower temperature causes a male. Large numbers of eggs are deposited in holes dug into mud or sand. Sea turtles lay their eggs on dry, sandy beaches. They are then covered and left to incubate by themselves. When the turtles hatch, they squirm their way to the surface and head toward the water. There are no known species in which the mother cares for the young. Turtles can take many years to reach breeding age, and in many cases breed every few years rather than annually.

Researchers have recently discovered a turtle’s organs do not gradually break down or become less efficient over time, unlike most other animals. It was found that the liver, lungs and kidneys of a centenarian turtle are virtually indistinguishable from those of its immature counterpart.

25 species of turtles will most likely become extinct, with another 40 species at very high risk of becoming extinct. Between 48 to 54% of all 328 of their species are considered threatened. Turtles and tortoises are at a much higher risk of extinction than many other vertebrates. Asian species are the most endangered, closely followed by species from Madagascar. Turtles face many threats, including habitat destruction, harvesting for consumption and pet trade. The high extinction risk for Asian species is primarily due to the long-term unsustainable exploitation of turtles and tortoises for consumption and traditional Chinese medicine, and the inhumane international turtle pet trade.

Every year, a variety of sources provides millions of animals to the exotic pet trade. Animals are captured from their native habitat and transported to various countries to be sold as “pets”. Others are surplus animals from zoos or their offspring. Backyard breeders also supply exotic animals. The sellers of these animals often disregard state or local laws regulating private possession of exotics, and the dangers, difficulties, physical and physiological needs of the animals they peddle. The suffering of the animals in the hands of unqualified and hapless buyers appears to be of no concern in the lucrative exotic pet trade. Reptiles pose safety risks to humans. Many incidents have been reported of escapes, strangulations, and bites from pet reptiles across the country.

Turtles are also victims of the animal entertainment industry. The use of wild animals as “entertainers” removes animals from their natural habitat; depriving them of the ability to freely engage in instinctual behaviors. Both children and adults are desensitized to animal mistreatment by the animal entertainment industry. Even under the best of circumstances, captivity is cruel for wild animals. Confined to tiny areas and gawked at by crowds, animals in exhibits and acts endure constant stress. They may suffer from temperature extremes and irregular feeding and watering. Without exercise, they become listless, their immune systems are weakened, and they become prone to sickness; many resort to self-mutilation in reaction to stress or boredom. Mental illness is rampant among confined animals. Torn from their families and deprived of all dignity, every part of their lives is controlled by their captors. While zoos may appear to be educational and conservation-oriented, most are designed with the needs and desires of the visitors in mind, not the needs of the animals.