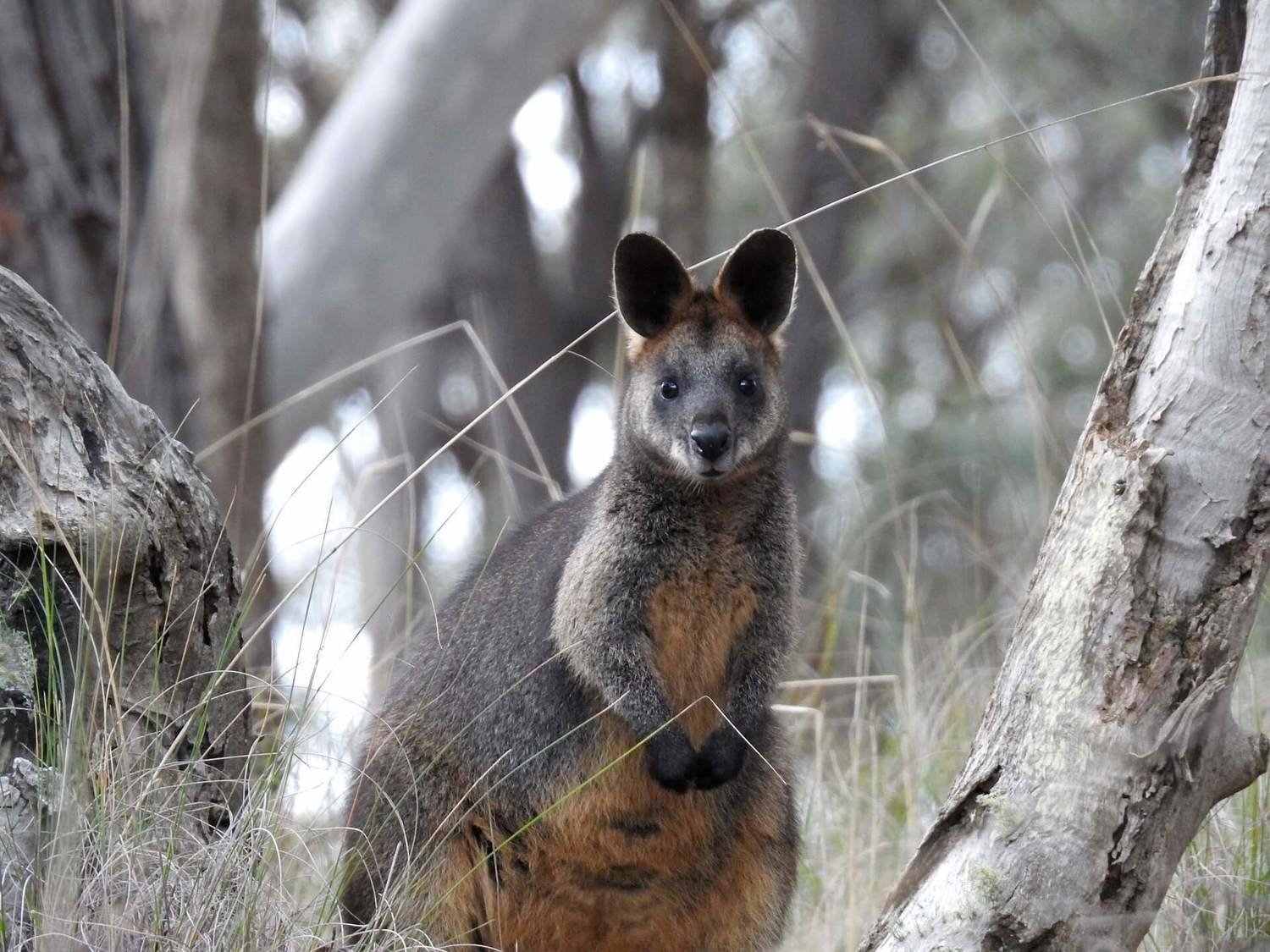 Your Adopt A Wallaby Kit comes in a Deluxe Folder and includes:

Adopt A Wallaby Kits make great gifts and can be sent directly to the recipient. Simply supply the recipient's name and mailing address as shipping information. We'll even include a letter stating the Adopt An Animal Kit is from you.

Wallabies are small to medium sized marsupials naturally inhabiting the Australian continent and surrounding islands. Wallabies have been introduced to other areas around the world by humans. The wallaby is closely related to the kangaroo. Wallabies are usually smaller than kangaroos.

There are about 30 different species of wallaby inhabiting a variety of habitats so diverse that they are often named after their habitat, including the brush wallaby, rock wallaby, and shrub wallaby. Some wallaby species are named after their size and appearance, such as the hare wallaby. Unlike their kangaroo cousins, wallabies usually prefer wooded or rugged habits instead of open arid plains.

Wallabies have elongated faces and large flat teeth. They have large pointed ears that can swivel independently.

The wallaby has powerful hind legs used to hop about. They can jump great distances. When fighting, males use their strong back legs to deliver powerful kicks. The forearms of the wallaby are significantly smaller than their back legs and are mainly used for feeding and balance.

The wallaby tail is commonly as long as the wallaby's body and is used for balance, self defense, springing up from a sitting position, and to prop themselves up. Wallaby tails also store fat for use in times of food shortages.

Wallabies keep cool by licking their arms, covering them with saliva. Wallabies are also able to swim by kicking their legs independently in a ‘doggy’ style paddle. They usually swim at dusk.

Wallabies are herbivores, feeding mainly on plants and grasses. The wallaby forages for grass, fallen fruits and seeds, and leaves from low trees and bushes. Wallabies have chambered stomachs similar to horses that help them digest fibrous plant materials. Wallabies regurgitate food, chewing it again and swallowing it. Wallabies can survive for months without drinking. Most of their water comes from their food.

Breeding season for most wallaby species is from January through February. Male wallabies will sometimes fight for females, but these fights are more ritualistic than aggressive. It is very rare for wallabies to hurt each other during fights. Female wallabies use a pouch on their abdomens to raise their young. Following a gestation period of only a month, mother wallabies give birth to a single baby wallaby, or sometimes twins, known as joeys. Newborn joeys are blind and hairless and only about the size of a jellybean. Joeys crawl up into their mother's pouch and attach to a teat to suckle where they remain for at least 2 months and develop over the next 7 months. They are cared for and nurtured until fully developed. Even after leaving their mothers pouch, baby wallabies will retreat to the pouch when they feel threatened.

If a mother wallaby becomes pregnant while a joey is still in her pouch, the development of the embryo will be paused until the joey leaves the pouch. Mother wallabies can produce two kinds of milk, one suited for a developing joey and one for a larger joey that has left the pouch. The older and younger joeys suckle on different teats to receive their specialized milk.

Wallabies live about 9 years in the wild.

Wallabies are threatened by habit loss, vehicle collisions, culling and animal agriculture. Many wallaby species are endangered. Some wallaby species are considered vulnerable to extinction in the wild. Four species of wallaby have already gone extinct.