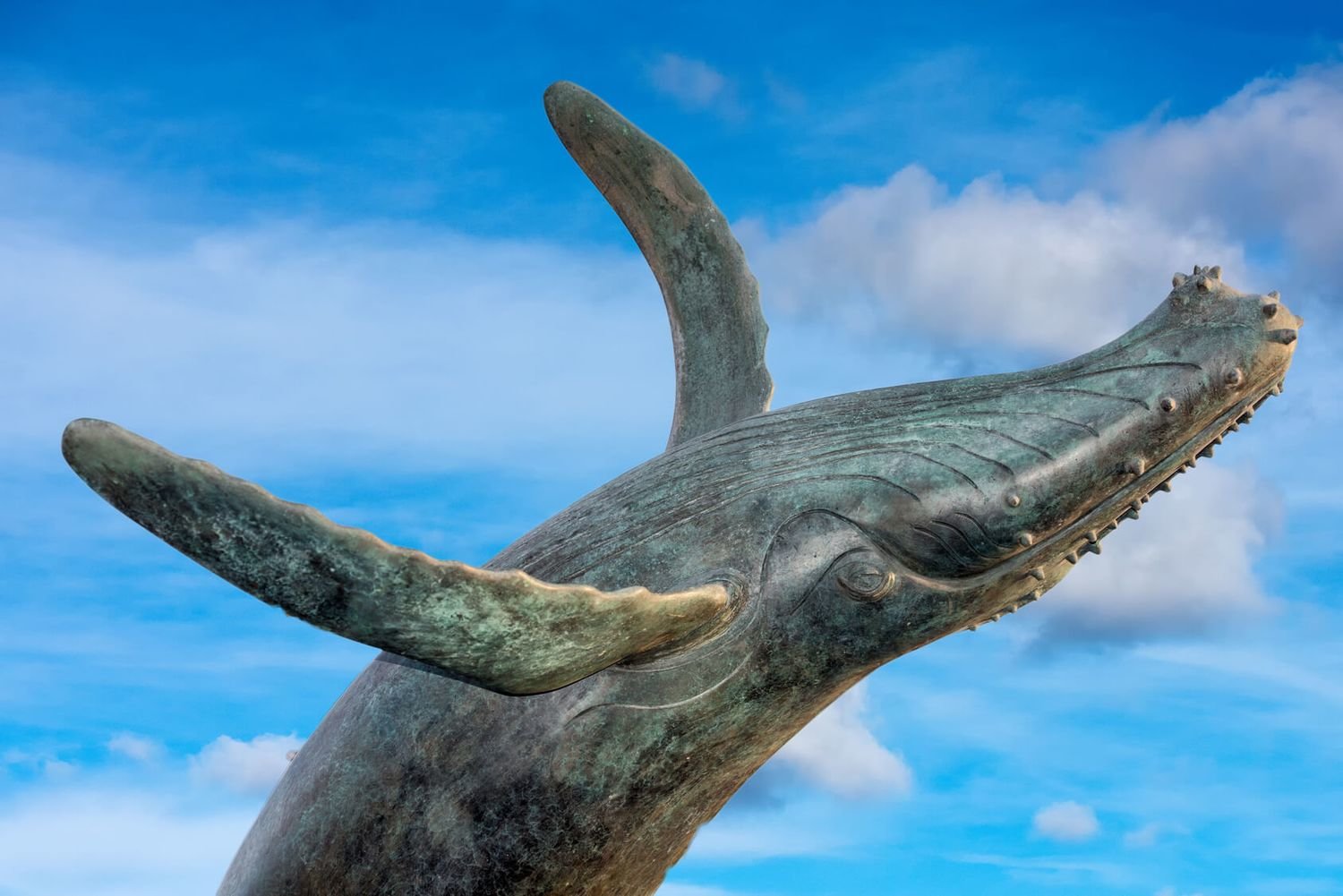 Your Adopt A Whale Kit comes in a Deluxe Folder and includes:

Adopt A Whale Kits make great gifts and can be sent directly to the recipient. Simply supply the recipient's name and mailing address as shipping information. We'll even include a letter stating the Adopt An Animal Kit is from you.

Whales range in size from the blue whale, the largest animal known to have ever existed, to pygmy species such as the pygmy sperm whale. Whales inhabit all the world's oceans and number in the millions. They are long-lived; humpback whales living for up to 95 years, while bowhead whales may live for more than a century. Human hunting of whales from the seventeenth century until 1986 radically reduced the populations of some whale species.

Blue whales are found throughout the world's oceans. The blue whale is the largest animal ever to inhabit the earth. This gentle giant has grayish-blue skin with light spots. It has about 300 to 400 baleen plates instead of teeth which it uses to strain food from the ocean water. Measuring 70 to 80 feet in length (the longest recorded length was 106 feet), blue whales can weigh as much as 90 to 150 tons. The female is larger than the male. The population of blue whales is dangerously low. They are endangered.

The lifespan of a blue whale is estimated to be 80 years. A blue whale can eat up to 7,715 pounds of krill (small shrimp-like organisms) per day. They swim 14 miles per hour (with bursts as fast as 30 mph) and feed at depths of less than 330 feet (but can dive as deep as 1,640 feet). Dives last from 10 to 20 minutes. Usually they travel alone or in small groups of two to four, although off the coast of California some groups as large as 60 have been seen.

Sexual maturity is reached between 5 to 10 years. Females give birth every two to three years to one calf. Gestation is 10 to 12 months; average calf is 23 feet long and weighs 4,440 pounds. A calf is fed by its mother for seven to eight months.

Blue whales once were considered too difficult to hunt because of their speed and size. With the introduction of factory ships and the harpoon gun in the 1920s, blue whales were hunted intensively. By the 1960s they were nearly extinct. Blue whales face threats from entanglement in fishing nets, pollution, and illegal whaling.

The gray whale ranges from slate gray to black with many white spots (usually patches of barnacles) and skin blotches (usually "whale lice" which are yellowish-white crustaceans). A baleen (toothless) whale, it has a long rigid snout and a double blow-hole. The gray whale does not have a dorsal fin but does have a low hump on its back and a series of small knobs or "knuckles" running down to the flukes. A female gray whale may reach a length of 40 to 50 feet and weigh up to 16 tons. Males are slightly smaller.

After years of intensive whaling, the gray whale population numbered only a few hundred, but today their population has bounced back. The western Pacific population of gray whales, however, is listed as threatened.

Gray whales migrate along the coast of North America from California to the Arctic or from coastal Korea to Siberia to spend the summer in arctic regions. For the winter, they return to warmer waters. This 4,000 mile annual migration is the longest made by any mammal. Gray whales prefer shallow waters and are often within a mile and a half of shore in coastal waters and breeding lagoons.

Gray whales feed on bottom-dwelling organisms such as amphipods (small crustaceans), mollusks and worms. They dive to the bottom, turn on their sides, and swim along the ocean floor scooping up sand and food, then strain the sand and water (through baleen filters), leaving the food inside.

Gray whales often play in the surf and shallow waters and surf the waves occasionally. They also sometimes leap completely out of the water, or spyhop, lifting their heads vertically out of the water to observe their surroundings.

Females bear one calf every two years after a gestation period of 13 months. Calves nurse for seven months.

Pollution and the disturbance of calving lagoons by humans are the main threats to the gray whale.

The humpback whale is black or gray with a white, grooved underbelly. Megaptera means 'giant wings' and refers to the their large front flippers, which are up to 15 feet. Humpback whales measure 35 to 48 feet long and weigh up to 65 tons. The female is larger than the male. In the 1870s humpback whales numbered around 125,000, but early in the 20th century whaling drastically reduced the population. Humpbacks now number around 5,000 to 7,500.

The humpback whale is capable of living up to 95 years. They are found in all the world's oceans. Humpback whales migrate annually from the tropics to polar regions.

Humpbacks sometimes engage in social hunting in which several whales encircle a school (group) of fish and blow bubbles that form a 'net' around the fish, then move in with their mouths open to devour their prey. Their favorite foods include krill and small schooling fish such as herring and mackerel, consuming between 2,000 and 9,000 pounds a day.

The 'songs' of humpback whales are complex vocalizations made only by the males. Humpbacks are well known for hurling their massive bodies out of the water in magnificent displays called breaching. Scientists are unsure why humpbacks breach, but believe it may be related to courtship or play activity.

Humpback whales mate during winter migration to warmer waters. Eleven to 12 months later the female gives birth to a single calf, weighing about two tons and measuring up to 13 feet long.

Whales suffer from illegal whaling, entanglement in fishing nets and death from pollution.

Endangered sperm whales ae the largest toothed mammal in the world. Males are significantly larger. They are dark blue-gray to black in color. Males pale as they age. Sperm whales have a gigantic, square-shaped head with a slender lower jaw. Their head makes up one-third of their length. They do not have a dorsal fin. The head houses a large spermaceti organ filled with spermaceti oil that turns from liquid to solid as the water turns colder. Because a solid is generally heavier than a liquid, this "weight" in the whale's head allows it to dive deep to find food, up to 4,000 feet.

They are found in all the oceans of the world, but concentrated in areas of plentiful food such as the coast of South America, the coast of Africa, the north Atlantic sea, the Arabian sea, the western north Pacific and near the equator. They feed on giant squid, schooling fish, seals and sharks. Sperm whales consume approximately one ton of food each day.

Sperm whales are found in mixed groups of 20 to 40 individuals including adult females, calves and juveniles. After weaned from their mother, juveniles leave their group to form juvenile schools. Females will return to a mixed group before reaching maturity while males form bachelor groups or become solitary. Sperm whales do not migrate over large distances as some other whale species do.

Sperm whales mate in the spring and have calves in the fall. A single calf is born after a 14 to 19 month gestation. Newborn calves weigh about 2,000 pounds and are about 13 feet in length.

In the past, sperm whales were hunted for their ambergris, a waxy oil substance. This oil was used for lighting fuel. Spermaceti oil was also used to make candles and lubricant.