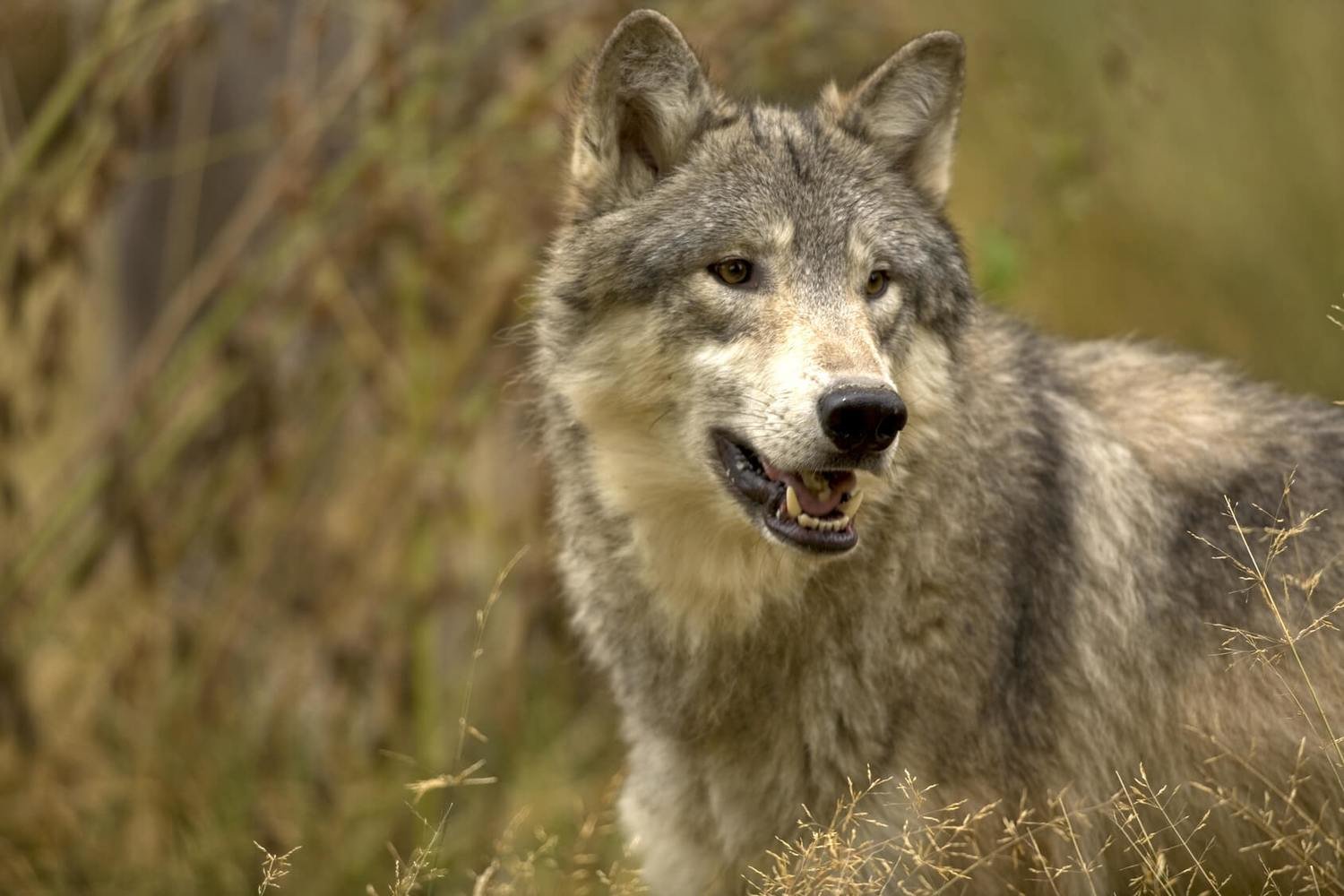 Your Adopt A Wolf Kit comes in a Deluxe Folder and includes:

Adopt A Wolf Kits make great gifts and can be sent directly to the recipient. Simply supply the recipient's name and mailing address as shipping information. We'll even include a letter stating the Adopt An Animal Kit is from you.

The wolf is the largest wild member of the canine family. On average, wolves stand 26 to 32 inches at the shoulder and weigh 55 to 115 pounds. Females are usually slightly smaller than males. They range in color from grizzled gray or black to all white.

Wolves are built for stamina, possessing features tailored for long distance travel. Narrow chests and powerful backs and legs contribute to the wolf's proficiency for efficient locomotion. They are capable of covering several miles trotting at about a 6 mph pace, though they have been known to reach speeds approaching 40 mph during a chase.

Gray wolves are listed as endangered in the Southwest under the Endangered Species Act (ESA) and threatened throughout the lower 48 states. Wolves in Alaska are not listed under the ESA. Endangered means a species is considered in danger of extinction throughout all or a significant portion of its range, and threatened means a species may become endangered in the foreseeable future. Regions of Yellowstone, central Idaho and the Southwest are designated as non-essential experimental populations, which isolate geographically-described groups from other existing populations and offer special regulations.

Wolves live up to 12 years. They can be found in forests, and on tundra, deserts, plains and mountains. They normally prey on large hoofed mammals such as deer and elk, but occasionally prey on smaller animals such as beavers or rabbits.

Wolves live in packs, which are complex social structures that include the breeding adult pair (the alpha male and female) and their offspring. A hierarchy of dominant and subordinate animals within the pack help it to function as a unit. The pack is led by the two individuals that sit atop the social hierarchy — the alpha male and the alpha female. The alpha pair (of whom only one may be the "top" alpha) has the greatest amount of social freedom compared to the rest of the pack, but they are not "leaders" in the human sense of the term. The alphas do not give the other wolves orders; rather, they simply have the most freedom in choosing where to go, what to do, and when to do it. Possessing strong instincts for fellowship, the rest of the pack usually follows.

Wolves communicate by scent-marking, vocalizing (including howling), facial expressions and body postures. They can visually communicate an impressive variety of expressions and moods that range from subtler signals – such as a slight shift in weight – to the more obvious ones – like rolling on the back as a sign of complete submission.

Wolves howl for several reasons. Howling helps pack members keep in touch, allowing them to effectively communicate in thickly forested areas or over great distances. Furthermore, howling helps to summon pack members to a specific location. Howling can also serve as a declaration of territory, as portrayed by a dominant wolf's tendency to respond to a human imitation of a "rival" individual in an area that the wolf considers its own. This behavior is also stimulated when a pack has something to protect, such as a fresh kill. Wolves will also howl for communal reasons—similar to community singing among humans.

Usually, only the alpha pair is able to successfully rear a litter of pups (other wolves in a pack may breed, but will usually lack the resources required to raise the pups to maturity). They mate in January or February. Females give birth two months later to a litter of pups. An average litter is four to seven pups. All the wolves in the pack assist in raising wolf pups. Some mature individuals, usually females, may choose to stay in the original pack so as to reinforce it and help rear more pups. Most, males particularly, will disperse however.

The size of the pack may change over time and is controlled by several factors, including habitat, personalities of individual wolves within a pack, and food supply. Packs can contain between two and twenty wolves, though an average pack consists of six or seven. New packs are formed when a wolf leaves its birth pack and claims a territory. Lone wolves searching for other individuals can travel very long distances seeking out suitable territories.

Wolves, like other canines, use scent marking to lay claim to anything from territory to fresh kills.

The illegal killing of wolves has become a leading threat to their survival. Another serious problem is human encroachment into wolf territory, which leads to habitat loss for wolves. As long as there is enough prey, wolves seem to avoid taking livestock, often ignoring them entirely. However, some wolves or packs can specialize in hunting livestock once the behavior is learned. In some areas across the world, hunters or state officials will hunt wolves from helicopters or light planes to "control" populations (or, in some instances, for sport), claiming it is the most effective way to control wolf numbers. Wolves are frequently trapped, in the areas where it is legal, using inhumane snares or leg hold traps. The economic value of wolf pelts is limited, so it is mainly a recreation activity. Wolf trapping has come under heavy fire from animal rights groups. Wolves are also inhumanely bred for their fur in some locations.