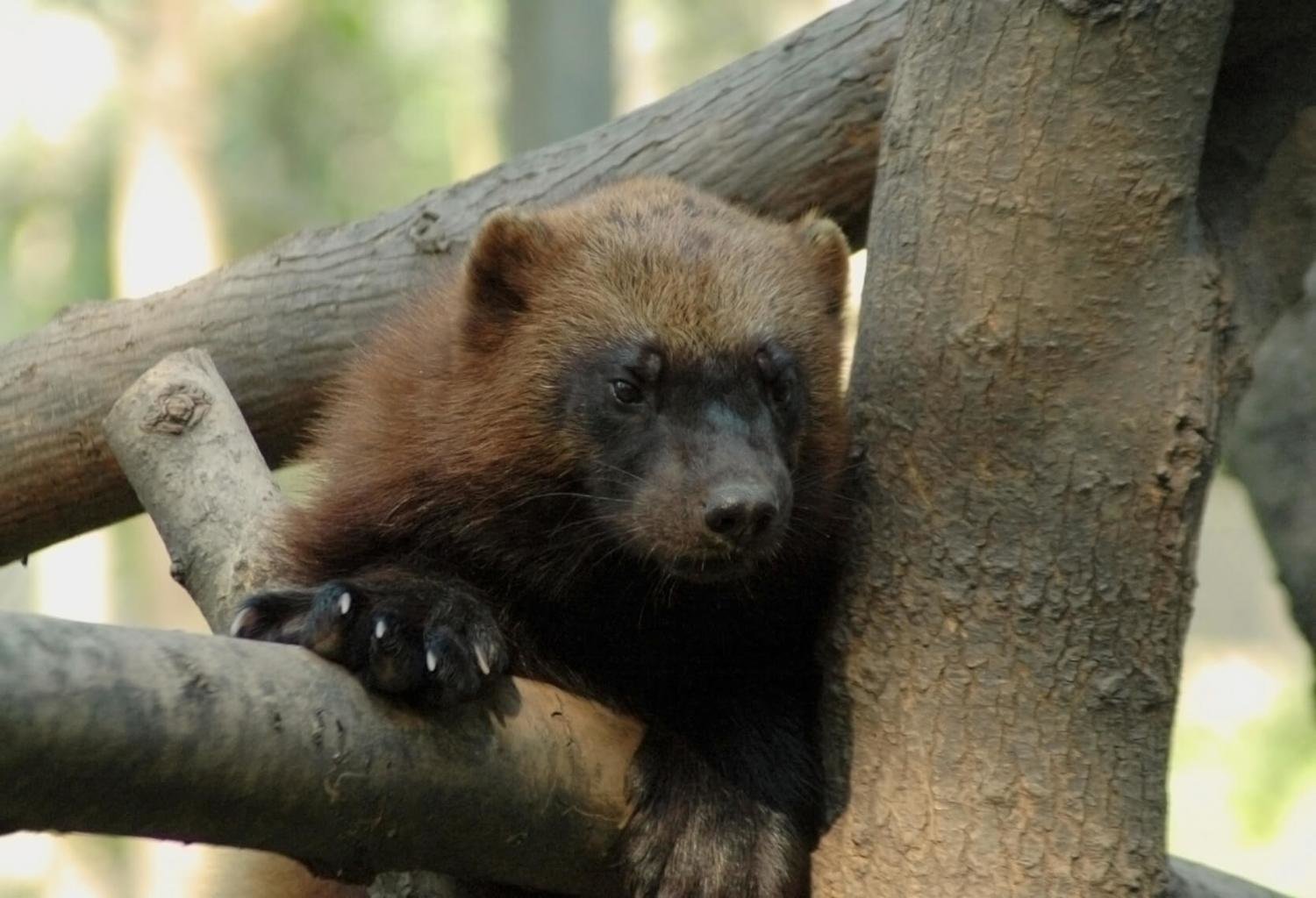 Your Adopt A Wolverine Kit comes in a Deluxe Folder and includes:

Adopt A Wolverine Kits make great gifts and can be sent directly to the recipient. Simply supply the recipient's name and mailing address as shipping information. We'll even include a letter stating the Adopt An Animal Kit is from you.

The wolverine, also referred to as glutton, carcajou, skunk bear, or quickhatch, is the largest land-dwelling species of the family Mustelidae (weasels). It is a stocky and muscular carnivore, more closely resembling a small bear than other mustelids. The wolverine, a solitary animal, has a reputation for ferocity and strength out of proportion to its size, with the ability to kill prey many times larger than itself.

The wolverine can be found primarily in remote reaches of the Northern boreal forests and subarctic and alpine tundra of the Northern Hemisphere, with the greatest numbers in northern Canada, the U.S. state of Alaska, the Nordic countries of Europe, and throughout western Russia and Siberia. Their populations have experienced a steady decline since the 19th century in the face of trapping, range reduction and habitat fragmentation, such that they are essentially absent in the southern end of their European range.

The wolverine is a stocky and muscular animal with short legs, broad and rounded head, small eyes and short rounded ears. The adult wolverine is about the size of a medium dog. The males are as much as 30% larger than the females and can be twice the females' weight. Wolverines have thick, dark, oily fur, making them resistant to frost. A light-silvery facial mask is distinct in some individuals, and a pale buff stripe runs laterally from the shoulders along the side and crossing the rump just above a bushy tail. Some individuals display prominent white hair patches on their throats or chests.

The wolverine is a powerful and versatile predator and scavenger. Prey mainly consists of small to medium-sized mammals, but the wolverine has been recorded killing prey such as adult deer that are many times larger than itself. Prey species include porcupines, squirrels, beavers, marmots, rabbits, voles, mice, shrews, lemmings, caribou, roe deer, white-tailed deer, mule deer, sheep, moose, and elk. Smaller predators are occasionally preyed on, including martens, mink, foxes, Eurasian lynx, weasels, and coyote and wolf pups. Wolverines often pursue live prey that are relatively easy to obtain, including animals caught in traps, newborn mammals, and deer (including adult moose and elk) when they are weakened by winter or immobilized by heavy snow. Their diets are sometimes supplemented by birds' eggs, birds (especially geese), roots, seeds, insect larvae, and berries. A majority of the wolverine's sustenance is derived from carrion, on which they depend almost exclusively in winter and early spring. Wolverines may find carrion themselves, feed on it after the predator is done feeding (especially wolf packs) or simply take it from another predator. Whether eating live prey or carrion, the wolverine's feeding style appears voracious, leading to the nickname of "glutton". However, this feeding style is believed to be an adaptation to food scarcity, especially in winter.

Armed with powerful jaws, sharp claws, and a thick hide, wolverines, like most mustelids, are remarkably strong for their size. They may defend kills against larger or more numerous predators such as wolves or bears. Wolverines are known to follow wolf and lynx trails with the intent of scavenging the remains of their kills. Wolves are thought to be their most important natural predator, with the arrival of wolves to a wolverine's territory leading them to abandon the area.

Wolverines inhabiting the Old World hunt more actively than their North American relatives. This may be because competing predator populations in Eurasia are not as dense, making it more practical for the wolverine to hunt for itself than to wait for another animal to make a kill and then try to snatch it.

Successful males form lifetime relationships with two or three females, which they will visit occasionally, while other males are left without a mate. Mating season is in the summer, but the actual implantation of the embryo in the uterus is stayed until early winter, delaying the development of the fetus. Females will often not produce young if food is scarce. The gestation period is 30–50 days, and litters of typically two or three young ("kits") are born in the spring. Kits develop rapidly, reaching adult size within the first year of a lifespan that may reach anywhere from five to 13 years. Fathers make visits to their offspring until they are weaned at 10 weeks of age; also, once the young are about six months old, some reconnect with their fathers and travel together for a time.

The world's total wolverine population is not known. The animal exhibits a low population density and requires a very large home range. The range of a male wolverine can be more than 240 square miles, encompassing the ranges of several females which have smaller home ranges of roughly 50 to 100 square miles. Adult wolverines try for the most part to keep non-overlapping ranges with adults of the same sex.

Female wolverines burrow into snow in February to create a den, which is used until weaning in mid-May. Areas inhabited non-seasonally by wolverines are thus restricted to zones with late-spring snowmelts. This fact has led to concern that changes in climate will shrink the ranges of wolverine populations.

Their requirement for large territories brings wolverines into conflict with human development, and hunting and trapping further reduce their numbers, causing them to disappear from large parts of their former range. Attempts to have them declared an endangered species have met with little success.