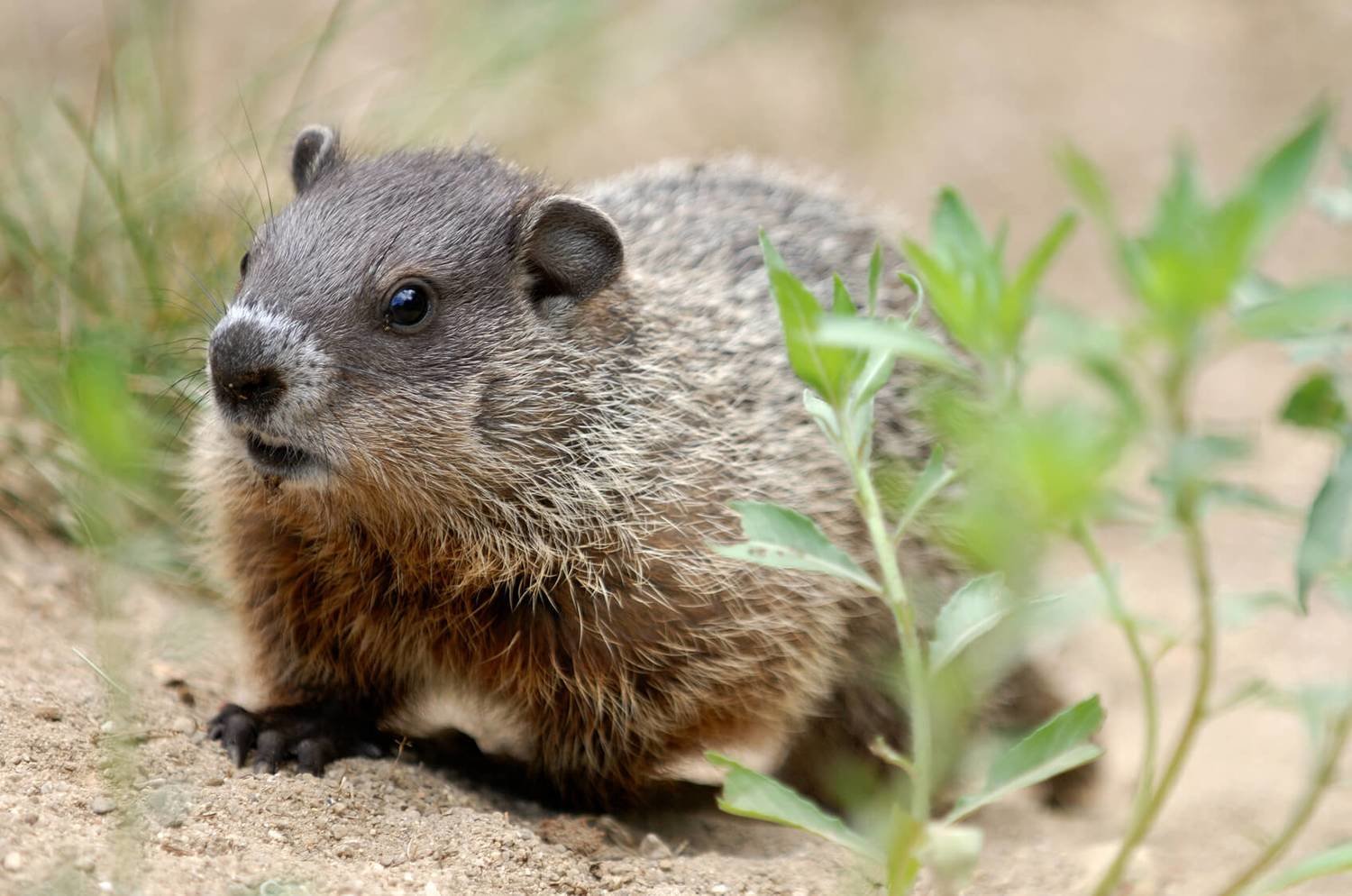 Your Adopt A Woodchuck Kit comes in a Deluxe Folder and includes:

Adopt A Woodchuck Kits make great gifts and can be sent directly to the recipient. Simply supply the recipient's name and mailing address as shipping information. We'll even include a letter stating the Adopt An Animal Kit is from you.

Woodchucks, groundhogs and whistlepigs – what do they all have in common? Although most people are familiar with the sight and sound of these rodents, few realize that the three names all refer to the same species. Belonging to the family Scuiridae, woodchucks are part of the group of larger ground squirrels referred to as marmots. Their habitat is broadly distributed across northeastern and central Canada and the USA, as far north as Alaska and as far south as Georgia.

Unlike their lighter tree squirrel relatives, ground squirrels typically remain on the ground, preferring to situate their burrows in open field or on the edge of woodland areas. They can readily climb trees though, and are also capable swimmers when they need to be. Woodchucks are the largest member of this family in North America, generally ranging from around 16 to 26 inches in length and 4 to 9lb in weight. In cases where predators are few and there’s a good food supply, woodchucks can even grow as large as 30 lbs in weight. Their plentiful numbers usually make them an ideal food source for foxes, coyotes, birds of prey, bears and wild dogs, meaning that the average lifespan for most groundhogs in the wild doesn’t exceed 5 or 6 years of age.

Like other burrowing rodents, woodchucks have characteristics that make for efficient soil removal; compact, cylindrical bodies with short, strong front legs and curved, thick claws. On average, a single woodchuck can move approximately 5500 lb of soil when digging a burrow. Their coat is double layered to provide insulation during colder weather, with a short, dense undercoat, and a longer topcoat of darker banded guard hairs. Their brush-like tail stands erect to provide a warning to other groundhogs when an individual is on the alert, and though they retreat to their burrows when they’re threatened, they can fight fiercely with their front incisors and claws if they’re cornered. Woodchucks also tend to be very vocal, communicating with others through a range of squeals, barks, whistles and tooth grinding noises.

As a defense against predators, groundhogs prefer to live in burrows. Although they’re often solitary, they may also live with several other individuals (particularly in the case of a mother with kits), and usually one or two members of a colony stand ‘guard duty’ at a time while others sleep or forage. These ground burrows are used for sleeping, hiding, raising offspring and hibernating, and typically have anywhere from two to five entrances to provide an easily accessible means of escaping predators. Despite the woodchuck’s size, their burrows are no small feat of excavation. The average burrow extends as much as 45 feet long and up to 5 feet underground – much like a small rodent city. Most groundhogs will also designate separate chambers in their burrows for sleeping, nesting, and depositing waste.

Woodchucks, like most other rodents, are mostly plant-eaters, preferring grasses, alfalfa, berries, tender bark and shoots from low tree branches, and planted crops when they’re available. They’ll also eat nuts, insects, grubs and snails, though not as often as other rodent relatives. They’re highly opportunistic and voracious foragers in warm weather, eating around 1/3 of their own body weight each day and building a thick layer of fat for survival over colder months when they enter their burrows to hibernate.

The groundhog’s hibernation cycle, and particularly the timing of its emergence from hibernation, is what makes the woodchuck so well known in popular culture. Many of us are familiar with the rituals of Groundhog Day. Woodchucks actually enter into a true hibernation, a behavior unique to only a few animal species, where the body’s processes slow down to conserve energy. These rodents build and enter their winter burrows (built in wooded areas below the frost line) when they’re at their maximum weight, and typically will hibernate from October to March, though this period is sometimes as short as three months in warmer climates. During this period, their body temperature drops drastically (to as low as 40 degrees Fahrenheit), and their metabolism, breathing and heart rate slow dramatically as well to minimize energy loss. Woodchucks then emerge in the spring with some remaining reserve of body fat to sustain them until sufficient plant growth appears.

Groundhogs are generally mature enough to mate in their second year of life, with the breeding season happening shortly after they wake from hibernation and emerge from their burrows. Mated pairs stay together in the den for approximately a month until the kits are born, but the male leaves as soon as the female is ready to give birth. She raises the young entirely on her own after that point. Woodchuck kits are blind, hairless and depend completely on their dam’s care and protection when they’re born, but mature very quickly, weaning and leaving their den at around 5 weeks of age. Kits often stay with the female for up to two months as she introduces them to their surroundings and teaches them behaviors to copy in order to survive and find food.

In most areas, woodchucks are unfairly viewed as nuisances because of their tendency to eat crops and burrow, which can compromise building foundations, and they aren’t currently considered threatened or endangered in North America. In some areas, in fact, woodchucks are very populous, and are hunted regularly for food, or to harvest their fur. They also tend to frequently fall victim to moving vehicles, since many build their burrows near grassy areas adjacent to roads and highways.