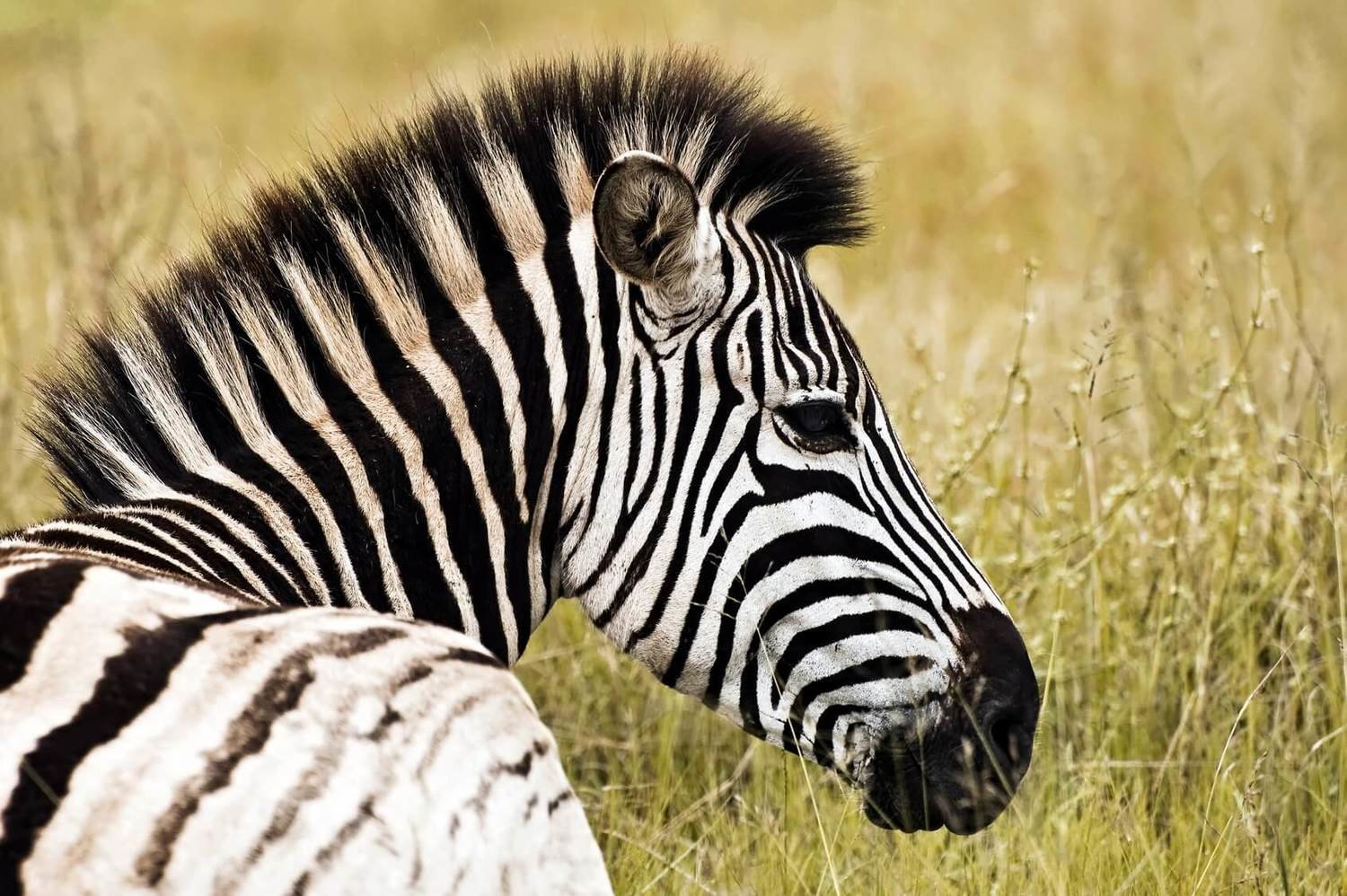 Your Adopt A Zebra Kit comes in a Deluxe Folder and includes:

Adopt A Zebra Kits make great gifts and can be sent directly to the recipient. Simply supply the recipient's name and mailing address as shipping information. We'll even include a letter stating the Adopt An Animal Kit is from you.

Zebras have black and white stripes all over their bodies except their stomachs, which are white. They have four one-toed hoofs. Their slender, pointed ears reach up to eight inches in length. Zebras have manes of short hair that stick straight up from their necks. The stripes on their bodies continue to the mane. They also have a tuft of hair at the end of their tails. The Grevy's Zebra differs from all other zebras in its primitive characteristics and different behavior.

Zebras reach six to eight-and-a-half feet in length. Their tails are an additional one-and-a-half feet long. Zebras weigh between 530 and 820 pounds. They are four to five feet tall at the shoulder. Equus zebra is generally larger than Equus zebra hartmannae.

Members of the genus Equus (horses, donkeys and zebras) can live 25 to 45 years.

The Mountain Zebra (Equus zebra) of southwest Africa tends to have a sleek coat with a white belly and narrower stripes than the Plains Zebra. It has two subspecies and is classified as endangered.

Grevy's Zebra (Equus grevyi) is the largest type, with an erect mane, and a long, narrow head making it appear rather mule like. It is a creature of the semi arid grasslands of Ethiopia, Somalia, and northern Kenya. It is endangered too. There are two subspecies of mountain zebra. Equus zebra is endangered and Equus zebra hartmannae is threatened.

Zebras occur in southwestern Africa. Equus zebra inhabits South Africa and Equus zebra hartmannae inhabits Namibia and Angola. The primary habitats of zebras are the slopes and plateaus of mountainous regions. Zebras inhabit elevations of up to 6,500 feet. Plains Zebras are much less numerous than they once were, because of human activities such as hunting them for their meat and hides, as well as encroachment on much of their former habitat, but they remain common in game reserves. The Grevy's Zebra (Equus grevyi), sometimes known as the Imperial Zebra, is the largest species of zebra. It is found in the wild in Kenya, Somalia, and Ethiopia, and is considered endangered, partly due to hunting for its skin which fetches a high price on the world market. Compared to other zebras, it is tall, has large ears, and its stripes are narrower.

Zebras feed on a variety of grasses. They are most active in the early morning and late afternoon. They spend up to half of the daylight hours feeding. A zebra's top speed is slower than a horse, however they have much greater stamina. Zebras are highly social and usually form small family groups consisting of a single stallion, one, two, or several mares, and their recent offspring. Groups are permanent, and group size tends to vary with habitat: in poor country the groups are small. From time to time, Plains Zebra families group together into large herds, both with one another and with other grazing species, notably Blue Wildebeests.

Unlike many of the large ungulates of Africa, Plains Zebras prefer, but do not require, short grass to graze on. In consequence, they range more widely than many other species, even into woodland, and they are often the first grazing species to appear in a well vegetated area. Only after zebras have cropped and trampled the long grasses do wildebeests and gazelles move in. Nevertheless, for protection from predators, Plains Zebras retreat into open areas with good visibility at night time, and take turns standing watch.

Grevy's Zebra has a social system characterized by small groups of adults associated for short time periods of a few months. Territories are marked by dung piles and females within the territory mate solely with the resident male. Small bachelor herds are known. This social structure is well adapted for the dry and arid scrubland and plains that Grevy's Zebra primarily inhabits, less for the more lush habitats used by the other zebras. Like all zebras, Grevy's Zebra males fight amongst themselves over territory and females. The Grevy's is vocal during fights, braying loudly. The Grevy's communicates over long distances.

Foals (baby zebras) weigh 55 pounds at birth. Mares normally give birth to their first foal when they are between three and six years of age. Normally they then give birth to one foal every one to three years until they are 24.

The spread of agriculture is one of the main threats to zebra. Their habitat is destroyed to make room for new farmland, and they are hunted and killed so that domestic livestock can graze on the land. Zebras are also hunted for their skins.

Zebras are common victims of the animal entertainment industry. They are often found on display at zoos, roadside zoos and "wildlife safaris." Denied their wild nature, strong family bonds and natural social interactions, they face the constant stresses of life in captivity.