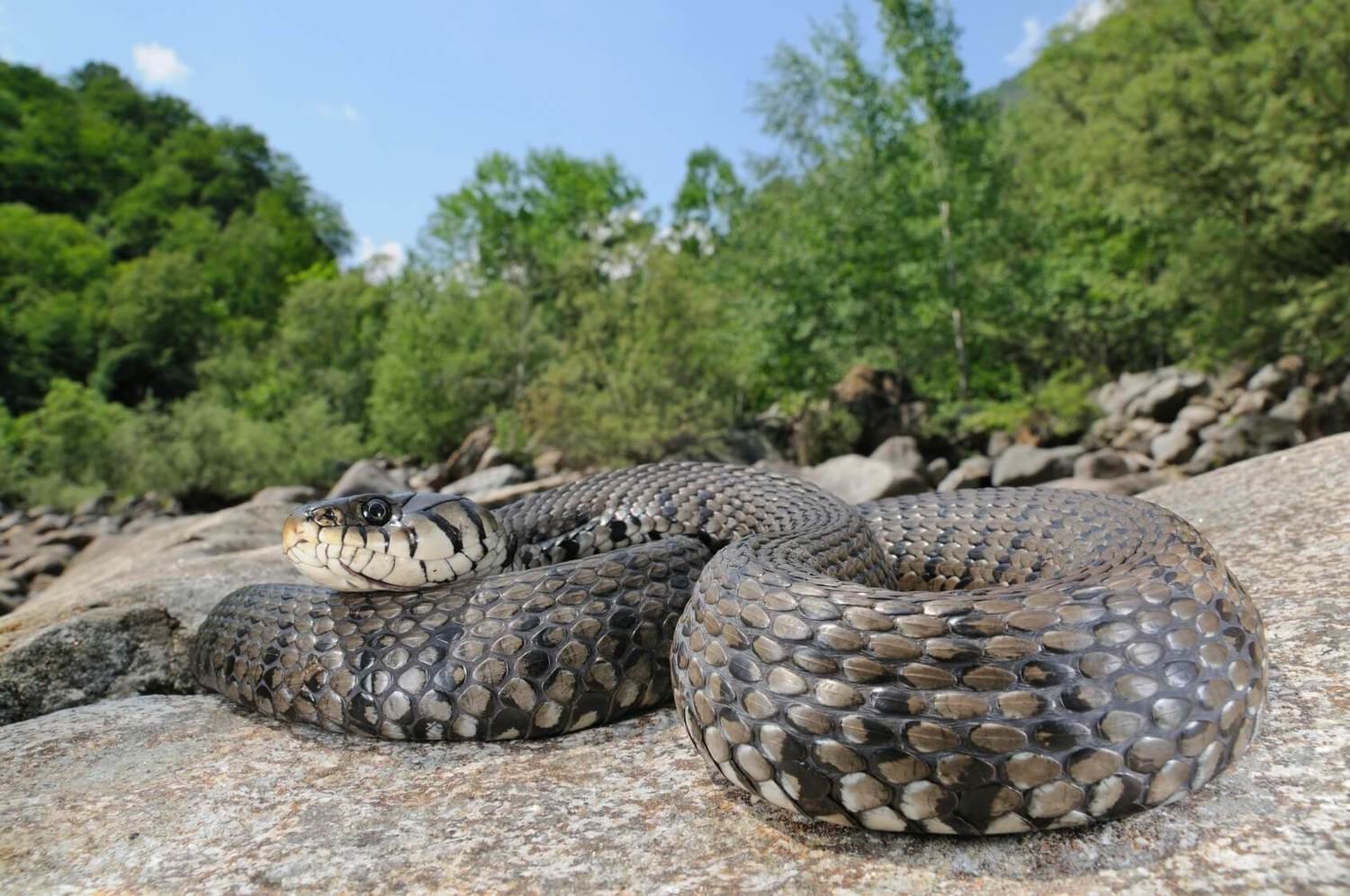 Your Adopt An Anaconda Kit comes in a Deluxe Folder and includes:

Adopt An Anaconda Kits make great gifts and can be sent directly to the recipient. Simply supply the recipient's name and mailing address as shipping information. We'll even include a letter stating the Adopt An Animal Kit is from you.

The most common snake of the Anaconda genus is the green anaconda. These snakes are found in the tropical forests of South America and have the scientific name, Eunectes murinus. All members of the Eunectes genus are aquatic and found in South America; namely Ecuador, Peru, Bolivia, Brazil, Columbia Venezuela and Trinidad & Tobago.

The green anaconda is considered the largest snake in the world. Its cousin, the reticulated python, rivals the anaconda in length, but the anaconda’s girth makes it nearly twice as heavy. The green anaconda can grow to be 29 feet in length and 12 inches in girth. It is not uncommon for them to weigh in at 550 pounds. Females tend to be significantly larger than males. The yellow, dark spotted and Bolivian anaconda species are all a good deal smaller than the green anaconda.

Being aquatic, anacondas prefer to live in the swamps, marshes and slow moving rivers of the Amazon and Orinoco basins. On land in the tropical rainforests, anacondas are slow and clumsy, but in the water they are deadly. With their eyes and nasal slits located directly on top of their heads, anacondas can lay in wait for prey while almost completely submerged and hidden from sight. Their dark green color and body pattern affords them effective camouflage.

The green anaconda preys upon deer, birds, fish, turtles, capybara, caimans and the occasional jaguar. They can go weeks or even months without eating after a particularly large meal. Anacondas are nonvenemous and dispatch their prey by wrapping their thick, muscular body around it and constricting until the animal asphyxiates. Since the majority of their hunting is done in water, the anaconda’s prey is as likely to die from drowning as from constriction. Their jaws are attached by stretchy ligaments which allow them to swallow their kill whole. They are able to consume prey up to 50% of their own body size. A myth about anacondas is that they “unhinge” their jaws in order to swallow large prey. In reality, their jaws are not hinged like those of humans at all.

Anacondas sense nearby prey through a series of vibrations. They also detect chemical cues in the air with their forked tongues and Jacobson’s organs. Males of the species use these mechanisms to sense female pheromones during breeding season. Anacondas also have pit organs along their upper lip that allow them to detect heat signatures given off by potential prey. Their visual and auditory senses are poorly developed in comparison, but likely play a small role in hunting for prey.

Predation upon the anaconda is dependent upon the age and health of the individual snake. Young anacondas experience a high mortality rate, and are therefore very aggressive. Jaguars and caiman prey upon young snakes. Snakes in dryer areas experience higher levels of predation than those living in river basins. Large anacondas experience far fewer instances of predation, especially females who sometimes kill and eat males during mating season. When under attack, green anacondas burrow into the mud or flee into the water where they are much faster and more agile. If unable to escape an attack, they will coil into a ball to protect their head and emit an odor from their cloacal glands.

A group of anacondas is referred to as a bed or knot. During mating season, a knot of competing males will surround a female forming a breeding ball that can last up to four weeks. The males coil around the female and fight to gain access to her cloaca. The female may breed with several of these males during this period, and sometimes will eat the males after mating. It is not uncommon for a pregnant female to feed on nothing else until after birth, so this behavior ensures her survival. Competing males rarely fight with one another over a mate, and after breeding migrate back to their home territory or continue on in search of other females.

Unlike other snake species, the female anaconda retains her eggs until the time of birth. She delivers two to four dozen live young at the end of her seven month gestation period. Females mate during the dry season, usually March – May, then remain mostly inactive for the following seven months. They give birth in shallow water in the late afternoon or evening during the wet season. The group of live young is referred to as a clutch. Scientists have found that clutch size is proportional to the size of the snake, with larger females having larger clutches. This may be due to larger females having greater fat reserves than smaller females. Breeding usually occurs every other year allowing the females to recuperate from the trying tasks of breeding, pregnancy and birth. The average lifespan of the anaconda is approximately ten years in the wild and up to thirty years in captivity.

Anacondas are extremely adaptable to their environment, aiding in their survival in harsh tropical environments. During the dry period, the anaconda must either migrate in search of water or burrow into the mud for survival. Those that burrow underground enter a state of dormancy for the duration of the dry period. Anacondas living in direct proximity to river basins are usually spared this survival technique.

Anacondas are most active in the early evening when the oppressive tropical heat is less intense. They are able to cover long distances in short periods of time, especially when searching for water in the dry season, or when males are seeking females for breeding. Anacondas are poikilotherms, meaning they cannot regulate their own body temperature. They strategically position their bodies into the path of the sun for heat regulation.

Anacondas have little impact on the indigenous people of South America. They are one of the only snakes capable of killing and consuming a human, but since humans do not typically live in areas where anacondas thrive, these deaths are rare. Some Brazilians and Peruvians believe that the anaconda possesses magical and spiritual powers. They kill snakes and sell their body parts for use in rituals.