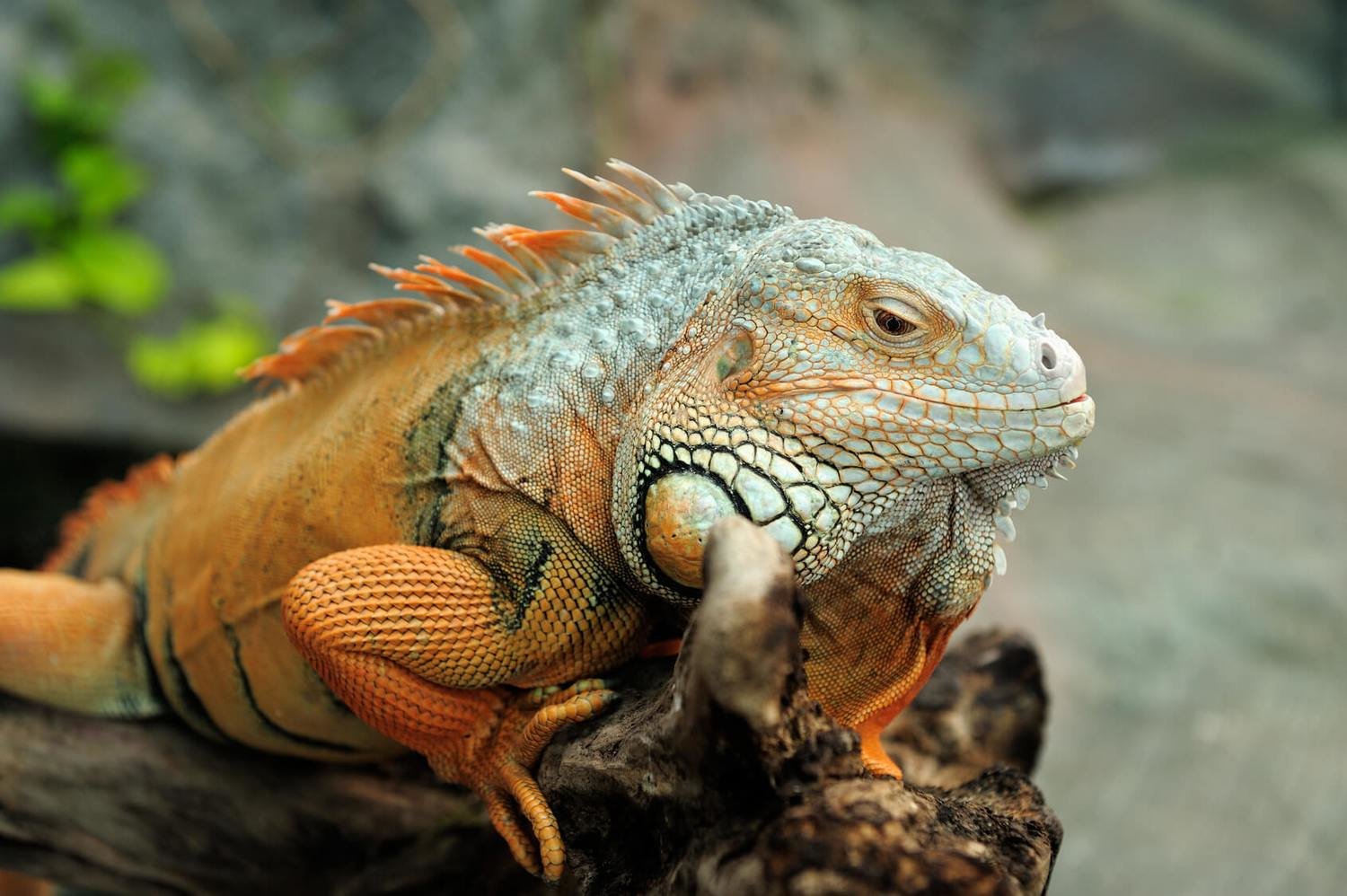 Your World Animal Foundation Adopt An Iguana Kit comes in a Deluxe WAF Folder and includes:

Adopt An Iguana Kits make great gifts and can be sent directly to the recipient. Simply supply the recipient's name and mailing address as shipping information. We'll even include a letter stating the Adopt An Animal Kit is from you.

The green or common iguana is a species of large, docile lizards native to the tree tops of Central American, South American and Caribbean rainforests. They are omnivorous reptiles bearing the scientific name Iguana iguana. One of the largest lizards in the Americas, they measure from three to six and a half feet in length and weigh in at eight to seventeen pounds. Other members of the iguana family include the Fiji Island banded iguana, the Galapagos Island marine iguana and the desert iguana. These lizards vary in size, appearance and endangered status.

Iguanas prefer the high forest canopy in order to take in the sunlight without ever having to go down to the ground where they are vulnerable to predators. Being poikilothermic, iguanas must take in sunlight in order to regulate their body temperature. Although they prefer forest environments, iguanas can adapt to more open areas. No matter what type of region they inhabit, iguanas prefer to be near water. They are excellent swimmers and dive beneath the surface to escape from predators.

The green iguana has natural camouflage from predators with its scale pattern of green, brown and yellow. They back into the lush foliage of the forest and remain perfectly still until the predator has passed on. They are capable of changing color slightly, but not nearly as well as other lizards such as chameleons. Iguanas will position themselves on branches that hang out over the water so that they may drop in and escape using their swimming skills if threatened. An iguana can survive a leap onto solid ground from heights up to forty feet.

They may look awkward and clumsy, but iguanas are actually quite fast and agile on land when they must be. They have powerful jaws lined with razor sharp teeth and whip-like, muscular tails that are about twice the length of their own bodies. If caught by a predator, iguanas can use their tails as weapons or detach them and grow another without permanent damage.

Iguanas have exceptional eyesight which aids in avoiding predators and seeking out prey. They detect even the slightest movement in the canopy from long distances. They use visual cues to communicate with others of their species. They do this through a series of rapid eye movements easily picked up by other iguanas thanks to their superb eyesight.

Their stout bodies are covered with soft, leathery scales, and they have a row of spines that extend from the back of their heads all the way to the tip of their tails, descending in size as they go down. Iguanas also have a dorsal crest that is larger in males (up to 3 inches high), and a dewlap underneath their chin (also larger in males). Male iguanas are larger than females of the species. Males have broad jowls and a bulge behind the cloacal vent that contains their reproductive organs.

Juvenile iguanas tend to be a much brighter green than adults, and can be difficult to sex until they develop. One way to determine sex is through femoral pore secretions that are at their highest during breeding months in males. Scientists have found a connection between the size of the femoral pores and the likelihood of males to perform mating displays. Dominant males perform more often and have larger pores, leading scientists to believe there is a relationship between social dominance and secretions.

Green iguanas are social animals. They bask in the sun and forage for food together among the treetops. Males are more aggressive and territorial than females, and battles over the best basking spots, territories and females are common. Juvenile males do not compete for these resources, but must always be on alert around mature males in their group.

Mating season for the green iguana only lasts a few weeks and usually occurs in fall which is the first half of the dry season. This is the only time of year that iguanas spend their time on the ground. Males become more aggressive during mating season and display themselves to females for selection. Mating displays include pushups, head bobbing, and dewlap extensions. Females congregate in the territories of larger males and seem to make their mate choices based on phenotype. During mating, the male positions his cloaca over that of the female by biting into her flesh to hold her in place. The male then deposits his sperm.

Female iguanas carry their eggs for two months and lay them during the second half of the dry season. They build nests in the sandy soil far apart from one another. Hatching occurs early in the rainy season, usually in early May. Females will lay eggs each season whether they have been fertilized or not. Batches of eggs are referred to as a clutch. Clutches usually consist of twelve to thirty eggs, of which only a third will survive. After ninety days of incubation, the baby iguanas hatch. Juveniles disperse rapidly after hatching and are very vulnerable to predators. They will reach sexual maturity when they are about sixteen months old.

Although classified as omnivores, most wild iguanas prefer a strongly herbivorous diet. They are especially fond of ripe fruit and leafy green vegetation. They get most of their water from these plants, but also obtain water from rain and condensation that accumulates in the canopy. Green iguanas enjoy the occasional insect in their diet, and juvenile lizards survive primarily on insects until they are old enough to visit foraging sites for fruit and vegetation.

The green iguana has a lifespan of fifteen to twenty years in the wild.

The green iguana status on the Endangered Species List is considered threatened. This likely has a lot to do with human interference. Iguanas are killed for their meat and eggs or sold to zoos and private reptile collectors.

Iguanas are also threatened by the pet trade. Iguanas do not thrive in captivity. In fact, they usually die within the first year of being kept as a pet. Captivity is cruel for wild animals. Animals are captured from their native habitat and transported to various countries to be sold as “pets”. Backyard breeders also supply exotic animals. The sellers of these animals often disregard the dangers, difficulties, physical and physiological needs of the animals they peddle. The suffering of the animals in the hands of unqualified and hapless buyers appears to be of no concern in the lucrative exotic pet trade.