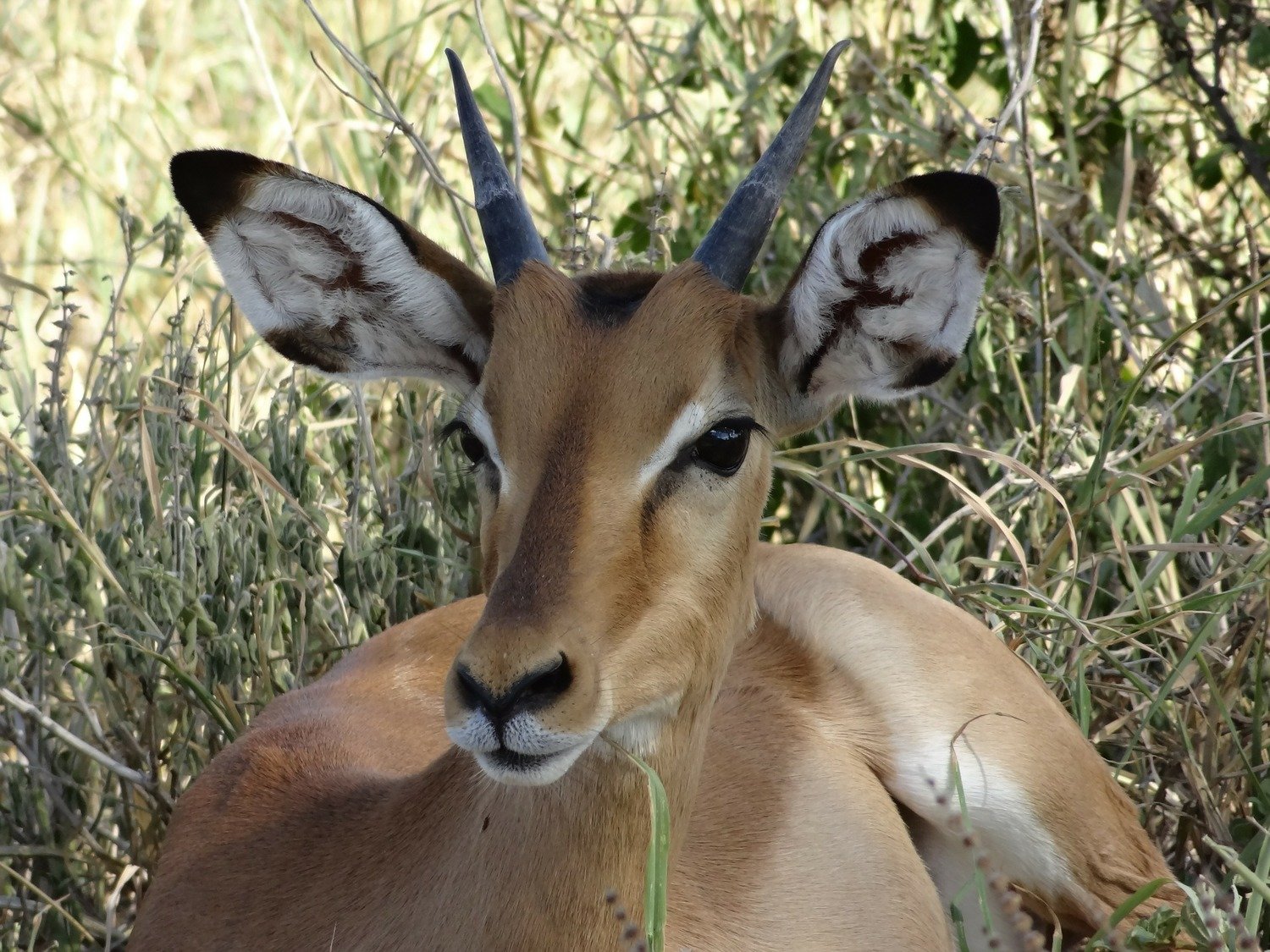 Your Adopt An Impala Kit comes in a Deluxe Folder and includes:

Adopt An Impala Kits make great gifts and can be sent directly to the recipient. Simply supply the recipient's name and mailing address as shipping information. We'll even include a letter stating the Adopt An Animal Kit is from you.

Impalas are one of the most common and most graceful of Africa’s antelopes. Male impalas, called rams, are well-known for their large, curved horns.

Impalas are members of the Bovidae family. They are related to goats, sheep and cattle. They have long legs and necks. Impala are covered with reddish or brown hair and black and white markings. The hair in their ears and around their eyes is white.

Rams use their horns for defense against predators and other male impalas. Female impalas, called ewes, do not have horns.

Male impalas secrete a scent from a gland on their foreheads to communicate their status to rival impalas. When a male impala loses his rank, he produces less scent. Male impalas fight for territory and status during the mating season, using their horns as weapons. Older impala males claim mating territories and herd females that they guard against rival impalas. The male impala must fight off any challengers, while continuously herding and mating with his females. Competing males who loose their attempt to take over the territory usually retreat to join a bachelor herd.

Impalas are among the most adaptable animals in the African savanna. They are able to alter eating habits with the season, feeding on what is available. Impalas are herbivores, eating only vegetation. Their diets includes bark, leaves, wood and stems. Impala prefer fresh grass, but will also eat foliage and shoots when fresh grass is not available. Impalas usually drink water during the hottest part of the day when predators are the most sluggish.

Impalas live in large tribes. Female and young impalas form herds of up to 100 impalas. Young impalas live in nursery schools, called creches, where they play and groom each other. Males live in bachelor communities of around 60 male impalas. Impalas occupy large ranges, making seasonal migrations from higher to lower areas based on the availability of food.

Female impalas leave the herd to give birth. They can delay birth for a month if the weather conditions are not favorable. After a gestation period of 6 to 7 months, mothers will give birth to usually only one impala baby. Twice as many female baby impalas are born each year than male impalas. Baby impalas are called calves. After one or two days, the mother impala will bring her baby back to the community. Calves are weaned in 4 to 7 months. By 12 to 18 months old, impalas are sexually mature.

Impalas have many natural predators, including lions, leopards, cheetahs, hyenas and crocodiles. They are able to jump over nine meters in distance, and over two meters high, to escape and confuse predators. Impalas use bark-like sounds to alarm each other of danger.
Impalas live for about 13 years in the wild.

The largest threats to impalas are hunting and habitat loss. Impala habitats are being disrupted with the expansion of roads and human settlements. Most impalas are currently not endangered, with a population of about 2 million. Fifty percent of impalas live on private lands. 25 percent of impalas live in protected areas. The Black-faced impala is endangered as a result of hunting.