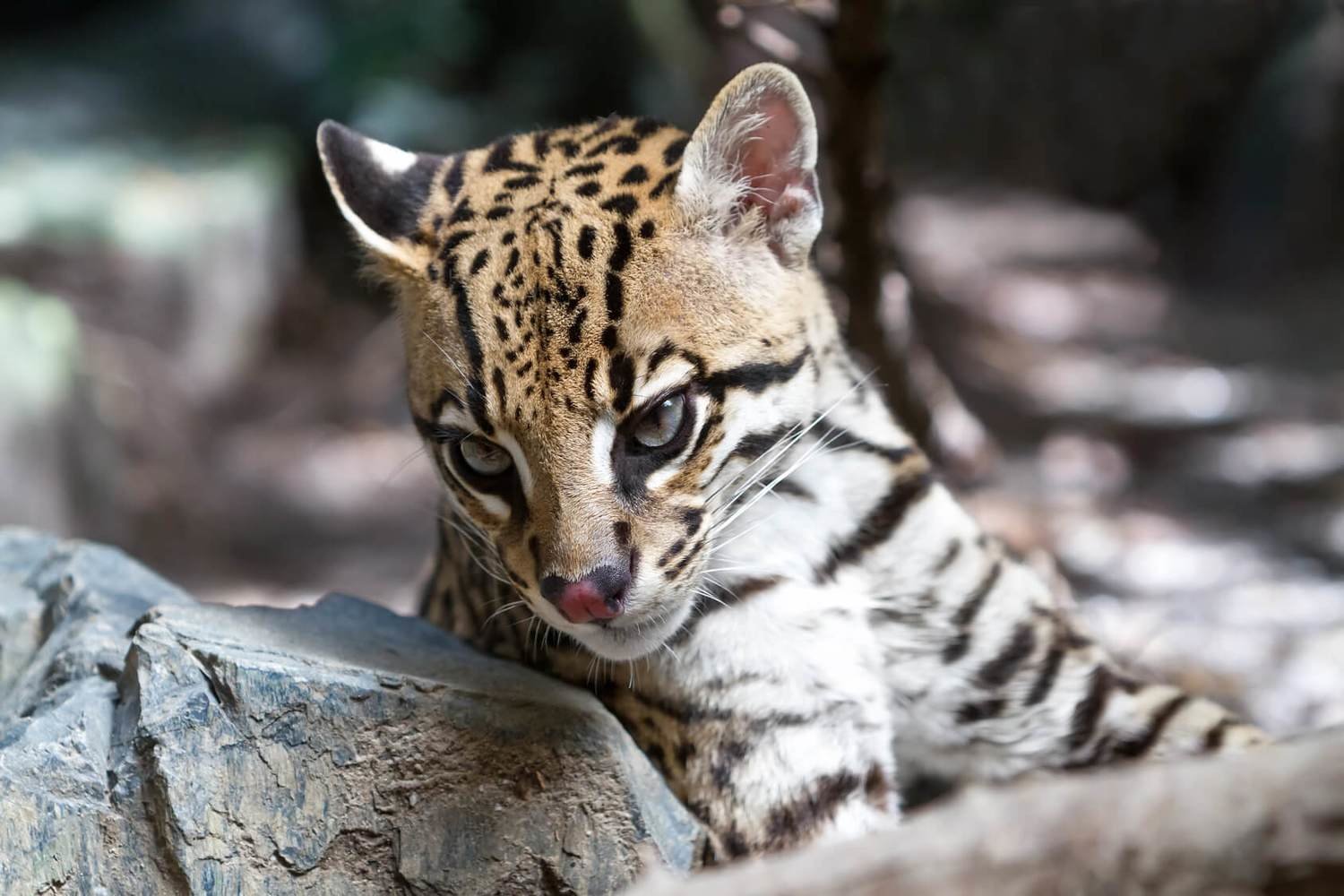 Your Adopt An Ocelot Kit comes in a Deluxe Folder and includes:

Adopt An Ocelot Kits make great gifts and can be sent directly to the recipient. Simply supply the recipient's name and mailing address as shipping information. We'll even include a letter stating the Adopt An Animal Kit is from you.

The ocelot is a wild cat distributed over South and Central America and Mexico. Its northernmost occurrence is Texas. It also occurs on the island of Trinidad in the West Indies.

Ocelots are up to 3'2" in length, plus 1'6" tail length, and weigh about 20-33 pounds. While similar in appearance to the oncilla and the margay, who inhabit the same region, the ocelot is larger.

The ocelot is mostly nocturnal and very territorial. They will fight fiercely, sometimes to the death, in territorial disputes.

Like most felines, they are solitary, usually meeting only to mate. However, during the day they rest in trees or other dense foliage, and will occasionally share their spot with another ocelot of the same gender. When mating, the female will find a den in a cave in a rocky bluff, a hollow tree, or a dense (preferably thorny) thicket. The gestation period is estimated to be 70 days. Generally the female will have 2-4 cubs, born in the autumn with their eyes closed and a thin covering of hair.

Ocelots typically breed only once every other year, although the female may mate again shortly after losing a litter. Mating can occur at any time of year, and estrus lasts from seven to ten days. The small litter size and relative infrequency of breeding make the ocelot particularly vulnerable to population loss.

Compared with other small cats, ocelot kittens grow quite slowly. They weigh around 8.8 oz at birth, and do not open their eyes for fifteen to eighteen days. They begin to leave the den at three months, but remain with their mother for up to two years before dispersing to establish their own territory. Ocelots live for up to twenty years.

While ocelots are well equipped for an arboreal lifestyle, and will sometimes take to the trees, they are mostly terrestrial. Prey includes almost any small animal. Monkeys, snakes, rodents, fish, amphibians and birds are common prey, as are small domestic animals such as baby pigs and poultry. Almost all of the prey that the ocelot hunts is far smaller than it is. Studies suggest that they follow and find prey via odor trails, but ocelots also have very keen vision; including, as their large dark eyes would suggest, night vision.

The ocelot's fur resembles that of a jaguar. It was once regarded as particularly valuable, and because it was so popular the ocelot remains one of the best known of the small wildcats. Several hundreds of thousands of ocelots were killed for their fur; therefore this cat is now an endangered species in many countries, although the IUCN lists them as "Least Concern".

Ocelots once inhabited the chaparral thickets of the Gulf coast in south and eastern Texas, and were found in Arizona. In the United States, they now range only in several small areas of dense thicket in South Texas. The ocelot's continued presence in the U.S. is questionable, due largely to the introduction of dogs, the loss of habitat, and the introduction of highways. Young male ocelots are frequently killed by cars during their search for a territory.

The main threats to ocelots are habitat loss due to agriculture, hunting for their fur and the pet trade. They are listed as Cites Appendix I, meaning, for the most part, they are no longer traded commercially. The Endangered Species Act prohibits ocelot pelts coming into the U.S., and they are now protected in most of the countries they inhabit. They are, however, still legally hunted in Peru, El Salvador and Guyana. Illegal hunting continues to occur in many of the areas in which they are protected.

Like many wild cats, ocelots are occasionally kept as pets. They suffer terribly in the inhumane pet trade. Sold like toys by unethical businesses and backyard breeders, profit is put above the welfare of the animals. Unprepared guardians purchase the animals, often with little knowledge on their care. Their complex physical, psychological and social needs can never be met when they are kept as pets.

Ocelots are also victims of the animal entertainment industry. Even under the best of circumstances, captivity is cruel for wild animals. Confined to tiny areas and gawked at by crowds, animals in exhibits and acts endure constant stress. They may suffer from temperature extremes and irregular feeding and watering. Without exercise, they become listless, their immune systems are weakened, and they become prone to sickness; many resort to self-mutilation in reaction to stress or boredom. Mental illness is rampant among confined animals. Torn from their families and deprived of all dignity, every part of their lives is controlled by their captors.