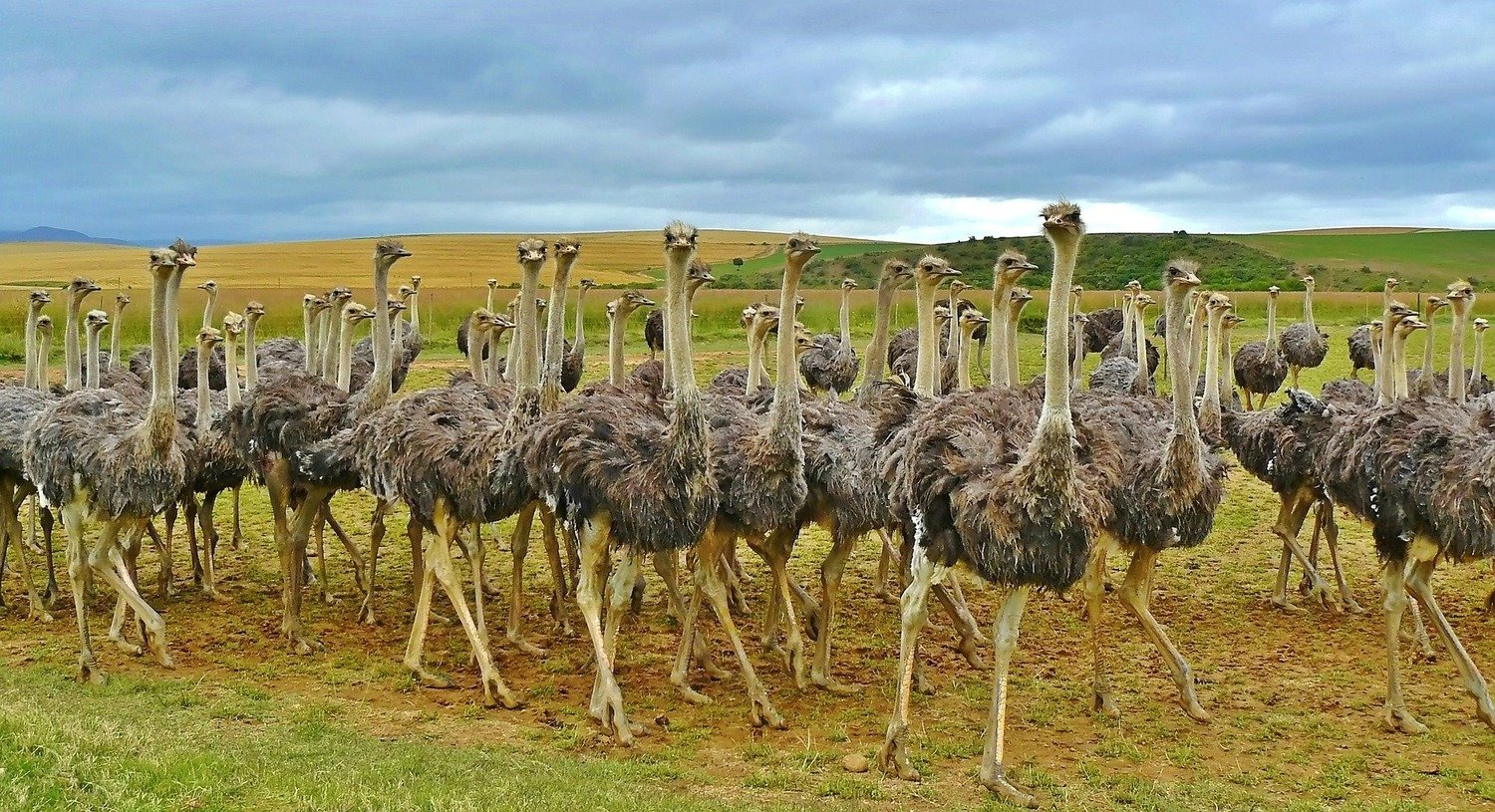 Your Adopt An Ostrich Kit comes in a Deluxe Folder and includes:

Adopt An Ostrich Kits make great gifts and can be sent directly to the recipient. Simply supply the recipient's name and mailing address as shipping information. We'll even include a letter stating the Adopt An Animal Kit is from you.

The ostrich is the largest bird in the world. Ostriches are also the fastest birds on the ground, capable of running up to 50 mph. Ostriches are flightless birds due to their size and weight. They use their amazing speed to escape threats.

Ostriches have three stomachs. Unlike all other birds, ostriches secrete urine separately from feces. They have two toes on each foot, where most birds have four. The large nail on the larger, inner toe resembles a hoof. Ostriches have the largest eyes of any land animal, allowing them to see predators at great distances. The thin legs of the ostrich are perfectly placed so the body's center of gravity balances on top of the legs. Ostrich feathers hang loosely and do not hook together like feathers of other birds.

Ostriches do not use their wings to fly, but they do use them to shade ostrich chicks, in mating displays, to cover their naked upper legs and flanks to conserve heat, and to help them change direction when running.

Ostriches are omnivores, feeding on a variety of plants and animals. The ostrich diet includes seeds, leaves, grass, flowers, roots and fruit – as well as insects, small mammals and reptiles. Ostriches do not have teeth, so they swallow pebbles to grind their food. They can go without water for several days, using metabolic water and moisture ingested through their food sources, but they enjoy drinking and bathing in water.

It is a myth that ostriches bury their heads in the sand. Ostriches lie low when hiding from predators, stretching theirs neck along the ground. From a distance it appears the ostrich has buried its head in the sand. Ostriches also have a powerful kick they use for self-defense that can be fatal to most animals.

Ostriches often spend the winter months alone or in pairs. The rest of the year ostriches commonly live in large communities, or herds. Ostrich communities can consist of a dominant male, females (hens) and their baby ostriches. Ostriches travel together with other grazing animals, including antelopes and zebras.

Ostriches engage in fascinating, complex mating rituals. Males attempt to drive away all other males. Battles between males for females usually last just a few minutes, but can be fatal by competing males slamming their heads into each other. Males alternate wing beats until attracting a female. The two graze in synchronization, then the male excitedly flaps alternate wings while poking the ground with his bill. He will then violently flap his wings to symbolically create a nest in the dirt. While the female runs in circles around him with lowered wings, he winds his head in spiral motions. She then drops to the ground for him to mount her.

An alpha ostrich male constructs a large communal nest in the ground for his hens to lay their eggs. There can be more than 20 eggs in the nest, but usually only a couple eggs actually hatch as they are preyed upon by predators. Each female can determine her own eggs. Ostrich eggs are the largest of any bird species, 10 times larger than a chicken egg. Incubation of ostrich eggs takes about 6 weeks. They are incubated by the dominant female during the day, and by the male at night. Using the coloration difference of the two sexes, they attempt to prevent predators from detecting the nest. The drab-colored female blends in with the sand during the day, while the black male is more undetectable at night. Alpha male ostriches defend ostrich babies from danger and teach them to hunt for food.

Due to their large size and powerful legs, ostriches have few natural predators. The main predators of the ostrich are cheetahs, lions, hyenas and crocodiles.

Ostriches live up to 45 years in the wild.

Wild ostrich populations are declining drastically, with most ostriches surviving on farms or in game parks. The Somali ostrich is listed as vulnerable. As human populations grow, they expand into ostrich habitats. The construction of settlements and roads, and animal agriculture, are all contributing to ostrich habitat loss.

Humans are the main predators of the ostrich as they hunt and farm ostriches for their meat, eggs and feathers.

In some countries, humans inhumanely race each other on the back of ostriches.